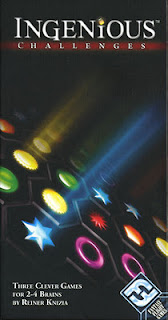 This evening, Kathy and I played two games that we received as Christmas presents this year.  First was a gift from our gaming buddy Glenn called Ingenious Challenges (designer Reiner Knizia, publisher Fantasy Flight Games).  This little box actually contains three games - "Card Challenge," "Dice Challenge," and "Tile Challenge" - that are based on Knizia's clever board game Ingenious.  We tried the Dice Challenge, whose scoring is based on the same "advance all six colors" principle of Ingenious but by rolling dice to match those of the opponent.  Right away, we began to appreciate that this is more than just "Yahtzee with colors and shapes."  The roll you decide to use for your score is also the roll that your opponent(s) will try to match and use to score as well.  So like the board game, it is as important to keep an eye on your opponents' scoring needs as it is your own when deciding the position you want to leave at the end of your turn.  In this case, each of us tried to avoid leaving dice that the other needed to score.  It turned out to be a very close game that Kathy won with some judicious re-rolls.


Our second game was a gift that I picked up for Kathy based on a recommendation (I wish I could remember from whom) as a "spouse" game - 24/7: The Game (designer Carey Grayson, publisher Sunriver Games).  This game for two to four players appeals to me in two respects - the gameplay challenge and the physical quality, much as do the two-player games Quarto and Hive.  In 24/7, players take turns laying tiles onto a board in a kind of crossword fashion, similar to Scrabble, except that the tiles are numbered from one to ten, only one tile is laid in a turn, and scoring comes from completing runs, matching sets, or sums adding to seven or 24.  In our game this evening, again, the importance of not leaving the opponent an opportunity to score became evident.  I had one big bonus score - completing both a seven and a 24 on a double-score space - that turned out to be the game-winner.  (In the photo, that was the '6' tile in the upper left corner of the picture.*)  I have been pleasantly surprised that my right-brained mystery-writer wife likes this arithmetic-dependent game as much as I do.

Incidentally, I'm inspired by GamerChris's new Picture of the Week series and Roberto Mendez's 52-weeks-52-photos geeklist to renew my amateur interest in boardgame photography.  So I hope to have the camera out more often and resort less frequently to stock box art images in the future.

*The astute observer and aficionado of 24/7 will observe that one of us made an illegal tile placement at some point during the game.  I will leave it to the reader to find the error.
Posted by Paul Owen

Email ThisBlogThis!Share to TwitterShare to FacebookShare to Pinterest
Labels: Ingenious