I am elated to report that I will be demonstrating Trains Planes and Automobiles at PrezCon at the DoubleTree Inn in Charlottesville, Virginia on Thursday 23, Friday 24, and Saturday 25 February 2012.  PrezCon has a special place in my heart, because that's where I first demonstrated the game in 2010 to Worthington Games and we sealed the deal with a handshake on the spot.  Before long, Worthington's new BlueSquare Board Games had released TPA as the first in its line of family games.  Seeing it on the PrezCon schedule has got me all juiced about game design again.

It's time to get back to work and turn some digested ideas into real playable prototypes.
Posted by Paul Owen No comments: 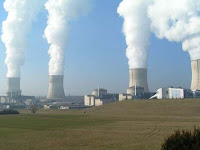 My latest design inspiration is a co-op game idea I've had for a while.  The setting is a nuclear reactor plant that has gone horribly wrong.  Players try to operate various controls to keep the reactor (or perhaps multiple reactors in a single plant) from melting down.  Problems can accelerate rapidly; players can quiesce one issue only to have another pop up elsewhere.  Players win if they can stabilize the entire reactor plant; players lose if any core gets hot enough to start a meltdown.

Existing co-op games like Pandemic and Forbidden Island are obvious models.  I have a couple of specific innovations to try to induce a strong sense of urgency (and perhaps panic) in the players.  I've realized that in general, a co-op game (one that does not have traitors) is rather like team solitaire.  That means that the game boils down to card luck and problem optimization.  The tricky part about making a game like this fun is ensuring that players' decisions are not obvious but do affect the progress of the game.  I want to make sure that mistakes cause setbacks but don't render the problem unsolvable.  So there has to be a pretty broad decision space, with multiple variables in play and multiple "knobs" for the players to manipulate in an effort to control the game state and get to a solution.

I recognize that in any players-vs-game, luck has to be a factor.  In fact, I think uncertainty and variability contribute to the fun and excitement of the game.  But I'd hate for the game to devolve into a question of what order the cards came up or how the dice rolled.

I had some thoughts regarding card luck in general.  In an upcoming post, I'll discuss a game design idea that came out of the question, "can I make a card game that minimizes card luck?"
Posted by Paul Owen 2 comments: