Papal Pilgrimage: A preview of the sequel to Avignon

The microgame format that Love Letter popularized poses a considerable design challenge.  Fewer cards mean players face statistically fewer different situations.  Pared down to a skeletal structure, a microgame really has to make every card significant and capitalize on every opportunity for interaction. John du Bois introduced a clever two-player tug-of-war in this format with the 2016 Button Shy game Avignon: A Clash of Popes.  To that tight little design Button Shy Games is Kickstarting a sequel, Avignon: Pilgrimage, that introduces new characters that can stand alone as a separate game or that players can mix in with the original Avignon for a variety of interactions.

Getting to Know "The Grid" 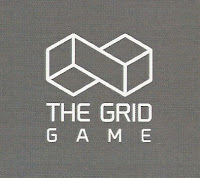 Games in some ways, like people, have personalities.  Some, like Ticket to Ride, are friendly, fun, and easy to get to know.  Others, like Two Rooms and a Boom, are gregarious and a little crazy; if you can handle the energy, they are very entertaining.  Some are obtuse and a little intimidating, like a Phil Eklund simulation or a heavy wargame.  And some are subtle, reserved, and a little introverted; they don't want to show you everything right away, and if you base your opinion on a first impression, you'll miss what's hidden underneath.

Dice, Dexterity, and Tactics: A One-play Review of "Barrage Battle" 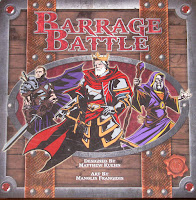 The application of dexterity to combat resolution in modern game design appears to be an emerging phenomenon, the Western-themed Flick 'em Up the most notable example.  Raechel Mykytiuk and Matthew Kuehn bring a new innovation by blending dexterity with the card-character skirmish format of such games as Up Front and Summoner Wars in the fantasy-themed combat game Barrage Battle, currently on Kickstarter with a funding date of Friday June 24. 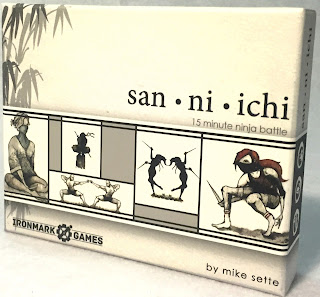 Chicago Cribbage is a 2007 title by Outset Media for two to four players.  It requires a cribbage board (not provided) and familiarity with the traditional game of cribbage.  It comes with its own deck of conventional playing cards plus 28 "Chicago Cards" that modify the game of cribbage.  In a sense, Chicago Cribbage can really be thought of as a "cribbage expansion" deck.

Full disclosure:  Outset Media gave me a review copy of Chicago Cribbage.  No other consideration was given associated with this review.

[Since Chicago Cribbage is intended for players already familiar with cribbage, I refer to standard cribbage terms and rules without definition in this review.]

And a rather handsomely printed deck of cards it is, too.  The playing cards that come with Chicago Cribbage are designed with a font and art deco style reminiscent of 1920s Chicago.  The face cards and aces feature mob characters and icons representing the period.  Overall the game presents a rather nice look and feel just in the conventional deck of cards itself.

Gameplay
The real innovation in the game comes in the form of the additional "Chicago cards," which add a new dimension to the familiar game of cribbage.  Each player starts with a fixed set of seven Chicago cards, each of which may be used only once in the course of the entire cribbage game.  There are two opportunities during a hand of cribbage where a Chicago card can be put into play.  The first is immediately after the deal (before players place cards in the crib), at which point any player may play a "Deal Again" card.  The second opportunity comes immediately after the cut (when the "starter" card is revealed but before any play starts), at which point a player may play one of any of the other possible Chicago cards - "Cut Again," "Trade Hands," "No Fifteens," or "Reverse Counting."

As you might expect, "Deal Again," "Cut Again" (which forces cutting a new starter card) and "Trade Hands" can be played to change the cards that you have to work with.  "No Fifteens" and "Reverse Counting" affect scoring of the current hand.  "No Fifteens" affects all players (including the one who played it); when played, combinations that add to fifteen are worth no points - not when playing cards, nor when scoring hands, nor when scoring the crib.  When "Reverse Counting" is played, all opponents hands (and crib, if the dealer is an opponent) score negative points, but one's own scoring is unaffected.

Impressions
At first, incorporating the additional Chicago cards takes some getting used to.  The two opportunities to play Chicago cards come almost as interruptions to the normal flow of a cribbage game, at least at first to the conventional cribbage player.  Once the Chicago cards become familiar, however, the opportunities to play them are anticipated and become a natural part of the flow of the game.  We found that when a hand is first dealt, the first thought isn't, "what should I put in the crib" but, "should I play the 'Deal Again' card?"

Likewise, after the cut, players start to evaluate the cut and the cards in hand against one's remaining Chicago card options.  A player holding several fives might benefit from a "Cut Again" in hopes of bringing up a face card as the starter.  Or if an opponent has built a big lead, it may be time to play "Reverse Counting."

We found that the Chicago cards nicely mitigate card luck, which had been a rather significant factor in our previous conventional sessions of cribbage.  A standard cribbage game requires some basic tactics to make the most of the cards that are dealt, but once dealt, the course of a hand is confined to the available cards.  Chicago Cribbage adds several opportunities to make up for bad card luck - but only a few opportunities, so the player must apply them judiciously.

We found that Chicago Cribbage is better suited to a full 121-point cribbage game, less so the shorter 61-point version.  It takes the full length of a 121-point game to force careful consideration of when to play a Chicago card, since there are only one or two of each available, and each can be played only once.  Most of them came into play over the course of a 121-point game, whereas they seemed underutilized and less tactically demanding in the shorter 61-point game.

One dimension that Chicago Cribbage adds is a certain poker-like element of trying to read one's opponent's reaction to his or her cards.  If I'm dealt a hand and react too enthusiastically, I can expect my opponent to play "Trade Hands" to take advantage of whatever got me so excited.  Similarly, if my opponent seems pleased with the starter card that is cut, I might consider playing "Cut Again" just to thwart whatever benefit he or she saw in that starter.

All of the games played for this review were in the standard two-player format, but Chicago Cribbage comes with enough Chicago cards to be played with three or four players as well (just as standard cribbage can be).

Summary
Chicago Cribbage is a clever addition of a new dimension to conventional cribbage.  It spices up an old familiar game in a new and challenging way.  Purists might object to introducing new gameplay elements to a time-honored standard (like some chess variants, for example), so I wouldn't recommend it for those who like their cribbage "just fine the way it is, thank you."  For those who have played "the old cribbage" but find it a little dry and uninteresting, however, Chicago Cribbage provides a new element of strategy and thought, perhaps more in keeping with the kind of decision-making and gameplay that characterize more contemporary board and card games.  I would especially recommend Chicago Cribbage if you have a cribbage board gathering dust in a drawer or closet and vague memories of enjoying cribbage but never recently including it in your list of, "so what should we play today?"

I should add that my wife and I are divided on whether Outset Media ought to consider offering Chicago Cribbage as a complete set, with cribbage rules and board provided.  My wife feels that Outset Media could expand its customer base and broaden interest in cribbage by offering the game in a form that players can learn from scratch.  For my part, I'm skeptical that the game would work as a way of learning cribbage itself; to me, the appeal of the product is in bringing new life to an old familiar game.

Chicago Cribbage is recommended for ages 10 and up (although Outset Media's "cribbage game" web page lists it as "8+").  Frankly, the age recommendation is irrelevant; if you are familiar with cribbage, you can play Chicago Cribbage.

Outset Media doesn't sell games from their website but refers customers to independent retailers across North America and provides a toll-free phone number to inquire about finding a local retailer.  I did find that Chicago Cribbage is available at Amazon for $9.99.

Posted by Paul Owen No comments: Links to this post