Four years ago I was inspired to identify the top ten games that my wife and I liked to play together. We've played a lot of games since then, and added a lot of games to our collection. So I thought I'd revisit this question. We found it very difficult to narrow the list down to ten; there are a dozen not listed here that we could easily have included instead.

#10. Villages of Valeria (Designers Rick Holzgrafe and Isaias Vallejo, Artist Mihajlo Dimitrievski, Publisher Daily Magic Games): I picked this up in a giveaway at UnPub 8 last March. It turns out to be a clever game of dukedom-building set in the same fantasy world as Valeria Card Kingdoms (below). The game tightly implements multi-use cards and an action-follow mechanic that reminds us of Puerto Rico and Race for the Galaxy in a cleaner format with much more transparent iconography. 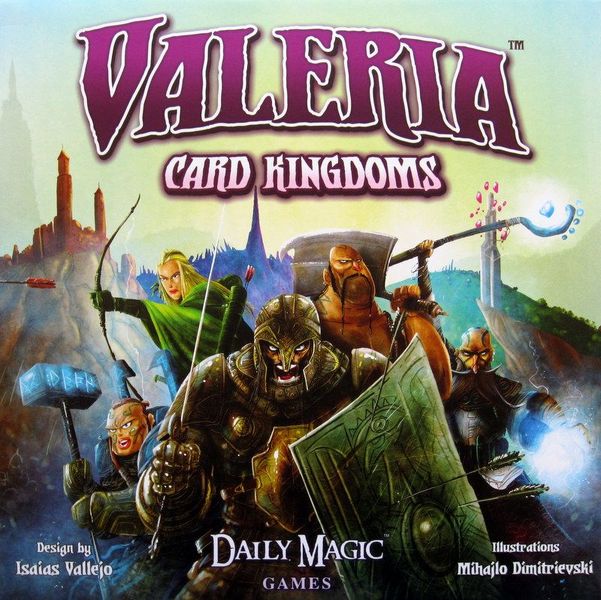 #9. Valeria Card Kingdoms (Designer Isaias Vallejo, Artist Mihajlo Dimitrievski, Publisher Daily Magic Games): Keith Ferguson introduced me to VCK at Origins 2016, and I subsequently picked up my own copy. Kathy and I have always liked this engine-building dice-driven resource card game in a two-player format, but it turns out to be popular with our sons as a family game as well, which led us to pick up a couple of the expansions (to which the format is particularly well suited).

#8. Seasons (Designer Régis Bonnessée, Artists Xavier Gueniffey Durin and Stéphane Gantiez, Publisher Libellud): I picked this up from the vendor at UnPub 5 on Darrell Louder's recommendation. It took Kathy and me a few plays to get the hang of the Magic-style card drafting and combo-building, but now we are quite taken with the card play in combination with the dice drafting and "seasonal" resource availability.

#7. Goa (Designer Rüdiger Dorn, Artist Oliver Freudenreich, Publisher Z-man): We received this neo-classic as a Christmas gift from a very good friend five years ago, and it has evidently disappeared from retail distribution since then. It features a unique bidding process for obtaining resource and scoring tiles, as well as a clever interaction of functions that motivates both diversity and specialization.

#6. 7 Wonders: Duel (Designers Antoine Bauza and Bruno Cathala, Artist Miguel Coimbra, Publisher Repos Production): This more recent Christmas gift re-formats the excellent multi-player drafting game 7W into a much better designed-for-two structure than the original's two-player variant with a dummy third player. We have yet to try out the Pantheon expansion.

#5. Codenames: Duet (Designers Vlaada Chvátil and Scot Eaton, Artist Tomáš Kučerovský, Publisher Czech Games Edition): Like 7W:D, this recent release is a re-formatted two-player version of a multi-player game, and a brilliantly executed one at that. The only cooperative game on this list, C:D puts us on the same team to give each other clues using the same set of 25 options.

#4. New Bedford (Designer Nathaniel Levan, Artist Nolan Nasser, Publisher Greater Than Games): I fell in love with this game when its prototype first appeared at Congress of Gamers five years ago. It remains a favorite combination of worker placement with the Puerto Rico bilateral structure of town building and shipping (or in this case whaling).

#2. Puerto Rico (Designer Andreas Seyfarth, Artists Harald Lieske and Franz Vohwinkel, Publisher Rio Grande): Another neo-classic European game that belongs in a hall of fame, PR was never intended for two players. As I've mentioned several times in this blog, we did find a variant on bgg that we like. 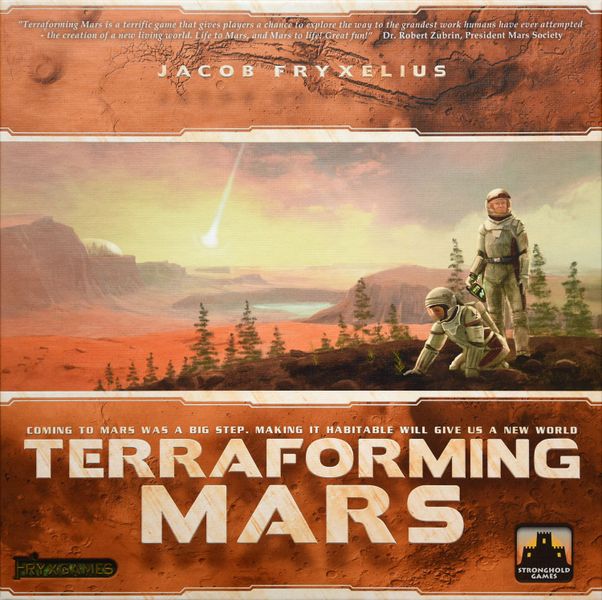 #1. Terraforming Mars (Designer Jacob Fryxelius, Artist Isaac Fryxelius, Publisher Stronghold Games): I picked this up on sale at our friendly local Island Games store, and it quickly became a favorite. I actually didn't expect Kathy to like it, but she gave it a try, and before I knew it, she beat me in the first three games we played. So I guess she picked it up pretty well. It's a solid favorite now.

Only one of these ten games - Puerto Rico - was on this list four years ago. Eight of the other nine games are new acquisitions since then. We still play all the games on the original list, except that 7 Wonders:Duel has replaced 7W as a two-player game altogether.
Posted by Paul Owen