Kathy and I had a very hard time narrowing ourselves down to ten favorite games.  We tend to play the following games the most often, and these are the ones we most enjoy.  There are others we wish we'd play more, but time does not always permit.  There are also others we used to play more often but that have made room for more recent interests; we still consider them old favorites, however.  So now, the top ten games that Kathy and I play together:

10.  Roll Through the Ages: The Bronze Age is a nice option when I've come home relatively late from work and we don't have time or mental energy for a serious game.

9.  7 Wonders gained some recent new life for us with the addition of the Leaders expansion.  We don't always like games that require a third "dummy" hand to facilitate a two-player game, but this one works for us.

8.  Chrononauts is a goofy Looney Labs title that we both like.  It's a much better light-hearted card game than any of the Fluxx titles, which still have their own appeal.

7.  Splendor is a recent addition to our collection that we really like, again as a relatively quick, undemanding game.

6.  Battle Line, by contrast, is the game we pull out when we really want to bash brains against each other.  We really love this taut card game, and the winner always feels as though he or she has earned it when the game ends.  Perhaps my favorite two-player card game of all time.

5.  Compounded, like 7 Wonders, requires a dummy third player, but it is very unobtrusive and actually introduces some interesting tactical decisions.  Another really fun one and surprisingly so even as a two-player.

4.  Puerto Rico is not intended as a two-player game at all, but I downloaded a variant from boardgamegeek that works very well for us.  We've played PR a lot and have never tired of this neo-classic.  We recently picked up the New Buildings expansion, so now this old favorite has new life.

3.  Love Letter doesn't really pose any deep tactical problems, but it is still a fun game and frequently provides the opportunity to get inside the head of the opponent, which really augments what would otherwise be a fairly simple logic puzzle into an interesting meta-game.

2.  Citadels is the other game of mutual mind-reading that we really love.  It plays very differently for two players compared to more typical, larger player counts, but the two-player rules work really well in their own right.  Kathy has become so proficient at second-guessing my secret roles - both in this game and in Love Letter -that I have come to refer to her as the "psychic assassin." 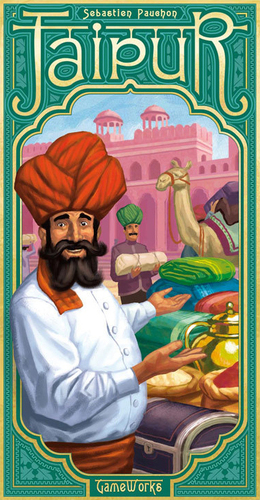 1.  Jaipur is our ultimate go-to two-player game.  We have played countless sessions and enjoyed every one of them.  At first glance, it would appear to have little gameplay depth or replay value, but in fact it is enormously fun and eminently enjoyable, at exactly the right point on the lightness-vs-depth spectrum for a late-afternoon cocktail game.


Honorable mentions - games we wish we could play more often, or old favorites that we don't play as much as we used to:

One last list:  These are games that I bought with every expectation that Kathy and I would play them on a regular basis, games that I thought would join the ranks of the regular two-player games listed above.  Instead, they fell flat with Kathy (or with both of us) and have tended to gather dust (or to see action only as multi-player games).