I had demonstrated "East India Company" to a publisher at PrezCon last February, and came away realizing that the action cards I had added since UnPub 5 last year still needed some balancing.  I was also dissatisfied by the amount of down-time I observed (although the players hadn't complained about it).  In anticipation of UnPub 6, I made three significant changes:


Saturday Jarrett Melville organized an UnPub Mini event at The Game Vault in Fredericksburg, Virginia.  This event was a nice informal gathering of game designers and playtesters at a friendly local game store that turned into a solid success.

Saturday 7 February was the first full day of UnPub 5, the unpublished game prototype playtesting convention that has grown dramatically in the last four years.  I split a Tag Table with Tony Miller, and by mutual agreement, I took the table first on Saturday.  I was glad to do so because I really wanted Lesley Louder to get a chance to play "East India Company" before she had to leave the convention early.  When Lesley's husband Darrell, the convention director, heard that I was setting up a game of "EIC," he had Richard Launius (Arkham Horror, Elder Sign) join us.  Rob Weaver made our fourth. 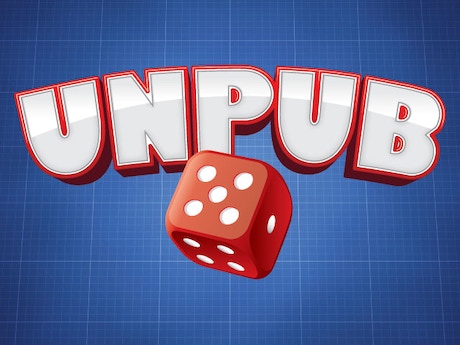 Keith Ferguson and I are at UnPub 5, presented by Ad Magic at the Baltimore Convention Center in Baltimore, Maryland.  Darrell Louder has really cranked up the gain on UnPub this year, with a terrific new location and a slate of activities for the pre-convention Designer Day, which just concluded Friday night.

Feminism discourse: Why are women the exception in boardgame design?

I've recently come to consider seriously why most of the game designers with which I'm familiar are male.  I became more aware of this observation when I learned of a couple of women who won game design awards over the last few years and realized how unusual it seemed to me at the time - specifically, Susan McKinley Ross, who won the 2011 Spiel des Jahres for Qwirkle (which I only learned of when Tom Vasel interviewed her last November), and Leslie Scott, who won the 2012 TAGIE for Excellence in Game Design for Jenga.

Last Saturday, Keith Ferguson ran an UnPub Mini event at Game Parlor Chantilly.  (I helped a little.)  We had about twelve designers and about 20 gamers playtesting over the course of the 11 hours that the store was open that day.  It was about as successful as we could have wanted.  For my part, I got to playtest "East India Company" and "Reactor Scram" one time each, as well as to play about four other games, though there were many more I wish I could have played.

As I mentioned in a post on May 8, there will be an UnPub Mini event this Saturday 21 June at 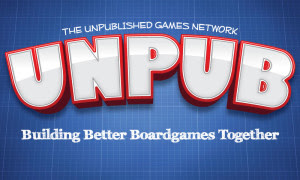 We now have a full slate of eleven designers lined up, so we have plenty of opportunities for gamers to come and try out new game design prototypes and provide feedback to the designers.

Designers and boardgamers in the northern Virginia area, mark your calendars:  Saturday 21 June will be an UnPub Mini event at

Great Heartland Dice Game
I was tremendously pleased to get to meet Jason Kotarski (Great Heartland Hauling Company) in person.  I got to playtest his dice-game spin-off, "Great Heartland Dice Game," with Shawn Purtell, Adam O'Brien, and Tiffany "Socially Inept Gamer" Bahnsen.  This was a fun variation on GHHC, kind of Yahtzee with cows.  Actually, there is an element of resource management, since having a gas reserve makes it possible to re-roll dice and score more effectively.  It's also possible to sell of extra dice to other players for gas.  The result is a clever little filler game that deserves a publisher's attention.

UnPub 4 Part I: Pitching and playtesting

Friday night - designers dinner
I had the privilege of an invitation to a designers and publishers dinner the night before UnPub, which I attended with my friend and fellow designer Keith Ferguson ("Santa's Workshop").  It was so great to see so many other designers and publishers again, many of whom I hadn't seen since UnPub 3 last year.  UnPub founder John Moller passed the reins to Darrell Louder (designer of Compounded), who hosted the designer-publisher dinner and directed the UnPub 4 convention admirably, with the able assistance of his wife Lesley Louder, Stephanie Straw, and other volunteers.

An evening after work

A number of my friends typically get together after work almost every Tuesday for gaming at our local game store, Game Parlor Chantilly.  I don't typically make it as often as I like, but this week was a pleasant exception.

I arrived early and met my good friend Glenn W., who happened to have a copy of Lost Cities (designer Reiner Knizia, artist Claus Stephan, publisher Rio Grande) in his car.  I'd played this once or twice at PrezCon years ago, so I was familiar enough with the rules to get reacquainted pretty quickly.  We jumped right in and played one hand while we waited for others to show up, and I think I won by a pretty narrow margin.  Most importantly, this re-exposure has rekindled my interest in picking this up as a candidate for Kathy and me to play during our frequent cocktail-hour games.  For some reason it had fallen fairly low on my wishlist, but now I really think it's a good option - not quite as brain-burning as Battle Line, but still a good two-player card game to try out.

Email ThisBlogThis!Share to TwitterShare to FacebookShare to Pinterest
Labels: UnPub

Brewmasters
In the last prototype game that I played at UnPub 3, I joined Chris Kirkman and Ben Rosset in a three-player round of Ben's "Brewmasters."  I have to say, this game is neck-and-neck with "Post Position" for my favorite game of all of those that I played at UnPub.  Players represent presidents of microbreweries, and the goal is to score the most points by producing beer.  Beer options include basic, tried-and-true recipes like porter, stout, and ale, while other more exotic concoctions like "pumpkin spice ale" score more points per unit brewed.  Players need to manage not only the acquisition of ingredients but the throughput of the brewing operation, from storage to fermenting to bottling to shipping.

East India Company - Three-player playtest
Late on the first day of UnPub 3, designers Ben Rosset and Stephen Craig joined me for a three-player game of EIC.  This game unfolded in a couple of unusual ways.  Ben gradually built up his fleet until he had four ships - two small, two medium - and fell into a pattern in which his four ships went to four different colonies, bought four different goods, and returned to Europe to unload all four ships in the same turn.  It was kind of an odd cycle, but it worked, because the diversification of commodities meant that he wasn't competing with himself.  Stephen tried a couple of different things before he eventually invested in a big ship and started making the long China spice run.  I think he might have made that trip twice by the end of the game.  I decided to try the "chaining markets" strategy of buying tobacco in one place, bringing it to another colony that bought tobacco and sold ivory, buying ivory to bring it somewhere else that bought ivory, and so on.  My method must have worked, because I ended up winning in a pretty narrow range of scores.  Although the game ran 150 minutes (a little on the long side for a three-player game), I was pretty happy with how it turned out.

Pig Pen
I first met designer Kevin Kulp at Congress of Gamers last October, when he playtested "East India Company."  He'd mentioned his set-building card game Pig Pen, but I never got to try it out at CoG.  So I was glad to find him and learn the game in a three-player session.  Pig Pen is just a fun, crazy draw-one-play-one game of assembling a pig pen consisting of four fences or walls, a gate, and a feed card.  Once those pieces are in place, a player can draw a pig and keep it in the pen - at least until something bad happens, such as an opponent taking a chainsaw to your wooden fence or detonating dynamite on your brick wall.  Then you've got one turn to repair the damage, or your pig runs away, potentially into the waiting arms of another player.  Oh, the betrayal!

I have begun to catch up on my sleep, and now I will begin to catch up on my blogging with a series of postsUnPub 3 event in Magnolia, Delaware, where 45 designers plus other gamers convened to playtest unpublished games in an open forum over two days.
on last weekend's

Finishing up my after-action report on the Unpub ProtoZone event at Congress of Gamers.
[Edit:  The "Dr. Wictz" design team has changed the name of their game from "Pole Position" to "Post Position," so I have updated it here for correctness. - PDO]

Post Position
The Unpub Protozone was organized to have us designers pre-register to bring our designs in for playtesting, but in fact the event was actually pretty open-ended.  Two fellows I'd never met before, Aaron Honsowetz and Austin Smokowicz, came in and asked Darrell Louder if they could get their game design playtested even though they hadn't pre-registered.  As it happened, there was an open table, so Darrell said, "Sure, no problem, go ahead and set up."  And thus the game "Post Position" was introduced to the Unpub.

Compounded
The game I specifically remembered from the CoG design room last year and really wanted to play again was Darrell Louder's "Compounded," a game of set construction with a particularly unique theme - building molecular compounds by combining elements.  Darrell calls it "better gameplaying through chemistry."  Players draw crystals from a bag whose six colors represent elements.  An array of 16 cards in the center of the table depicts different molecular diagrams that players can populate with element crystals to complete and score the corresponding compounds.  Some compounds are flammable and can be lost or even cause chain reactions.  All compounds score points when completed, but some also enable a player to draw more elements from the bag, store more on his workbench, claim more compounds for future scoring, or place more elements in a single turn.  Some also provide other particular special benefits.

Email ThisBlogThis!Share to TwitterShare to FacebookShare to Pinterest
Labels: Congress of Gamers, UnPub

This weekend saw a two-day session of game design playtesting at the Congress of Gamers in Rockville, Maryland.  CoG was the venue for an Unpub Protozone event in which several designers convened to have prototypes playtested and to compare notes on game design, development, and publication.  I had a terrific time with a number of energetic, imaginative game designers and saw some clever prototypes.