Recently I've been catching up on podcasts, including Tom Vasel's Boardgame University.  Back on Episode 16, he interviewed Susan McKinley Ross, designer of 2011 Spiel des Jahres winner Qwirkle (Mindware Games).  I was fascinated by the evolution story of Qwirkle, which started in "specialty toys," evolved through the "gamer market," and ended up in "mass market games."

Over the course of this discussion, I was intrigued by this "specialty toy" sub-genre of games that I find difficult to describe.  These are somewhere in the realm of family and party games. Companies with products in this genre include

An even more fascinating part of the interview centered on the prevalence of female independent designers among these specialty games.  Unlike Eurogame designers, however, their names typically do not appear on the box but are buried near the end of the rules.  Susan McKinley Ross named a few women who have significant design credits to their names or otherwise have a notable role in the business:

She also mentioned Mary Couzin, who runs the annual Chicago Toy and Game Fair (ChiTAG, which just wrapped up last weekend) and who seeks to promote designers as a method of branding games.  These women work in the market that is "between gamer games and mass market."  She thinks that as Americans become more accustomed to seeing designers' names on boardgame boxes, they may start to appear on these specialty market games, and female designers may gain more visibility. 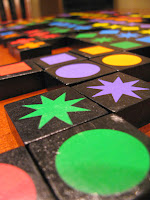 I'm reminded of a blog post I wrote last March when Leslie Scott (Jenga) won the 2012 TAGIE for Excellence in Game Design.  Although I recognized two of the other four nominees (Klaus Teuber and David Hoyt), I was particularly struck by the fact that I had never heard of Leslie Scott, and started to realize that there is a whole segment of the game industry to which I have very little exposure.

Hearing the podcast inspired me to suggest to Kathy that we play Qwirkle for our cocktail-hour game yesterday.  Maybe I should have kept my inspiration to myself.  We had a great game, but in the final analysis, well, she crushed me, 242 to 190.  I think I played too defensively - or maybe Kathy just beat me outright.
Posted by Paul Owen