The holidays provide plenty of opportunity for gaming time with friends and family.  (Sadly, for all the gaming we did in the last week, I have no pictures.  What's wrong with me?)

Last Friday our friend Theresa H. came over for a game.  We had several options, and when I described Le Havre (designer Uwe Rosenberg, artists Klemens Franz and Uwe Rosenberg, publisher Lookout Games [website in German]) as a "deeper version of Agricola," Theresa chose that to play.  We played the three-player shortened version, which has a few different buildings from the two-player that Kathy and I usually play.  This time Kathy really got her coal-coke-shipping engine going and made all kinds of money, but I was hot on the building strategy and constructed enough high-value buildings to eke out a win by five points.  Theresa made a good showing for her first game and had a good time.

Early this week a sequence of winter storms came through northern Virginia, and my house lost power for about 45 hours.  My kids were pretty bored without their usual sources of electronic entertainment, but one nice thing about boardgames is that you don't have to plug them into the wall.  So as we sat by the fireplace trying to stay warm, we broke out the games and had a reasonably good time by lanterns and candlelight. 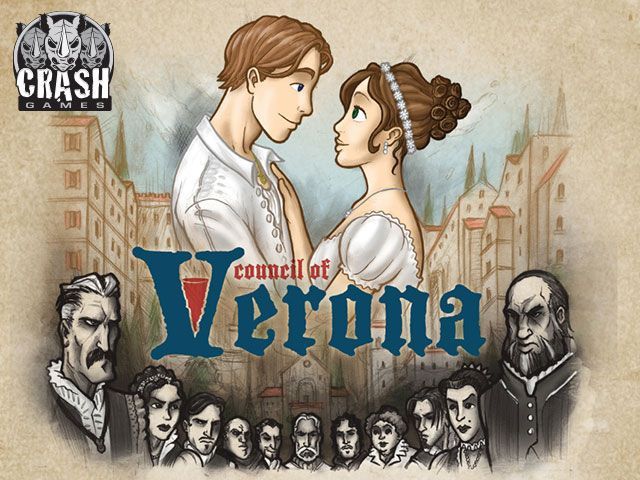 Earlier this week I received my Kickstarter reward copy of Council of Verona (designer Michael Eskue, artists Darrell Louder and Adam P. McIver, publisher Crash Games).  I was intrigued by the description of this game as soon as I read it, both for the Shakespearean theme and for the apparently tactical gameplay in such a small package.

A Wil Wheaton tweet called my attention to the nomination of the YouTube Geek and Sundry show Table Top for the 2013 Diana Jones Award for Excellence in Gaming.

Romance on the train: Love Letter and Ticket to Ride

Sunday afternoon, Kathy and I played Love Letter (designer Seiji Kanai, artists Andrew Hepworth and Jeffrey Himmelman, publisher Alderac Entertainment Group) for the first time.  This microgame poses some neat little logic challenges and opportunities for second-guessing, although in our first play, we didn't find it quite as "brain-bending" as Citadels, our favorite hidden-role game for getting inside each others' heads.  As it happens, we played two rules incorrectly.  First, in the two-player game, we failed to turn three cards face up at the start of each round to reduce the size of the playing deck and gain early insight into which cards were already out of play.  Second, we thought (incorrectly) that the Guard could target another Guard in an attempt to eliminate an opponent.  Since there are five Guards in the deck (as opposed to one or two of any other character), that made the Guard extraordinarily powerful in our game.  I've written before about my propensity for getting the rules wrong the first time I play a game, but fortunately, we still had fun, and the game was over in less than half an hour.  LL is a quick little diversion that I expect will get more play - and that I hope will become more intricate in the tactics and counter-tactics of anticipating each others' cards.

Love Letter arrives in the mail

Kathy recently placed an order with amazon that, by itself, would not have qualified for free super saver shipping.  So she asked if there was anything I'd like to add to the order.  I went straight to my boardgamegeek wishlist and picked out Love Letter (designer Seiji Kanai, artists Andrew Hepworth and Jeffrey Himmelman, publisher Alderac Entertainment Group).  I'd heard some very interesting hype about this little 16-card microgame.  Not every review was positive, but many were enthusiastic or at least intriguing.  I am most fascinated by the concept of a game of so few components that carries so much player interaction, logic, and second-guessing.  Coup falls into this category and, in some respects, Citadels.