Family games - what works for both adults and kids?

As parents of boys spanning eight years in age difference, we've struggled to find family activities that work for all of us.  Naturally, my first choice for an indoor occasion is to play a boardgame - anything we can all agree on and enjoy.  In my experience, a game that appeals to kids as well as the adults in the family does not come along often. 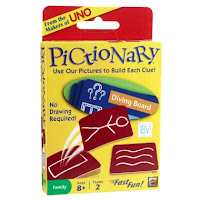 The other day we tried a little game that my son got for his birthday called Pictionary Card Game (designer Brian Yu, publisher Mattel).  Unlike the original Pictionary, which requires players to draw diagrams and pictures, the card game has a set of pictographs - little cards with icons, sketches, and other abstract or symbolic drawings that can be combined or manipulated to prompt teammates to come up with the intended answer.  There are two levels of play - adult level, where the answers that teammates need to guess require a certain familiarity with culture and turns of phrase (like "Yellow Submarine"), and kid level, where the answers are more generic (like "ruler").  Each answer has an associated category (like "school supplies" for "ruler") so that players have a general idea of what they're trying to guess.

What we found was that when adults play with kids at the kids level, the adults will start shouting a range of generic answers to the category before the "clue-giver" has much chance to assemble the pictographs into any kind of clue.  For example, when "school supplies" was announced, people started calling out "paper," "pencil," "eraser," "chalk," etc.  In several cases, the right answer was stumbled on in a matter of seconds.  So the conclusion I reached is that PCG probably works well for kids among kids, and for adults among adults, but not in a mixed setting of adults and kids.  Other word-association games that have not always succeeded to bridge the adult-kid gap include Catch Phrase (which the kids love but which the adults tend to dominate) and Taboo. 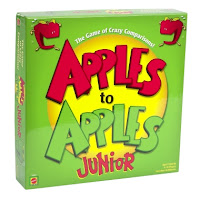 Games that have worked well for us in a broad age range setting include Clue, Apples to Apples Junior (though not the original Apples to Apples), Pirateer, and Guillotine.  In larger groups, we've had success with Are You a Werewolf? as long as the participants are comfortable in a player-elimination game.  (If the group includes kids who are sensitive about getting "voted out," then Werewolf won't work.)

Trains Planes and Automobiles fits the bill as a family past-time in a group spanning a broad mix of ages - even more successfully than I expected when I first conceived and developed the game.  I am frequently and pleasantly surprised by the positive reactions I get from both children and adults when I demonstrate it at conventions or hear from people who have played it at home.  I mentioned in my last post that it had become a favorite of our friends' son and that they love the fact that they can get together and play it as a family without having to drag people to the table.  I think the principle reason is that TPA rewards good decision-making enough to keep grown-ups engaged but also has enough luck and balancing elements to keep everybody in contention for the whole game.  Kids feel as though they have a good chance to win, while adults enjoy playing a real game that is more than just a roll-and-move luck exercise.