To me, boardgaming is primarily a social experience, and our new year celebrations this weekend have been no exception. 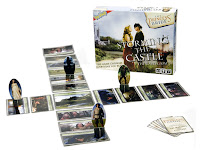 Last night, on the occasion of celebrating the new year, we visited our friends Brion and Theresa H. for dinner, drinks, and several games.  We opened with Citadels, the card game that has emerged as my very favorite discovery of 2011.  Theresa won handily with something like 27 points scored in an eight-district citadel that included all five colors.  Next we played Trains Planes and Automobiles, which I was pleased to learn had become a favorite among Brion and Theresa's family.  Yours truly managed to stay just ahead of Theresa for the win, helped by four consecutive air travel assignments facilitated with a frequent flyer and clear skies.  We wrapped up the New Years Eve gaming with Storming the Castle (designer Aaron Watson, publisher Toy Vault), a light-hearted card-driven race game based on the 1987 film Princess Bride.  My wife Kathy won as the giant Fezzek taking advantage of "four white horses" to beat us all to the castle.

Today I invited several friends over to play a couple of games and share some good company.  Grant G., his brother W.J., and Glenn W. joined me in rewriting the History of the World (designers Gary Dicken, Steve Kendall, and Phil Kendall - artists Charles S. Jarboe Jr, Steve Kendall, and Jason Spiller - publisher Avalon Hill), an old favorite that never seems to get enough play time.  Grant achieved a fairly commanding victory, in no small part to his success in holding on to his acquisitions and generating victory points for multiple epochs, particularly with the Romans in southern Europe and several Asian civilizations and a big scoring turn with the Arabs.  I had a strong early game with the Assyrians and a strong finish with the Mongols, Ottoman Turks, and Britain, but was nearly wiped off the map in the middle of the game around Epoch IV from which I never fully recovered.  I finished third behind Glenn.

If HotW can be subject to the vagaries of card luck, not so the brilliantly-designed Puerto Rico.  We invited my wife Kathy to join us for a five-player session.  PR has become one of my favorite games for its nearly pure dependence on player decisions for the course of the game.  I managed to pull out a win with some very heavy shipments of corn, tobacco, and sugar, just two points ahead of Kathy's dominant building performance.

This kick-off to the new year inspires me to revitalize my focus on boardgames and design.  Although I will miss Car Trunk Entertainment's Unpublished Games Festival "UnPub II" in Dover, Delaware later this month, I look forward to PrezCon in Charlottesville, Virginia in late February.

Here's to a whole new year of gaming developments and discoveries.