Many years ago at our engagement party, my wife Kathy introduced me to a close family friend she'd known since grade school, Stephen Craig.  He and I developed a great mutual respect and friendship over the years since then.  Not terribly long ago, we discovered that we share a common passion - designing boardgames.  At one design convention, he'd met Ben Rossett and convinced him to part with a prototype copy of his work in progress at the time, "The Market."

I met Ben Rossett myself at PrezCon last year when he was demonstrating "Stranded."  I didn't get to play that game, but at the World Boardgaming Championships that summer, I did get to meet up with Ben again and play a re-themed incarnation of "The Market" called Mars Needs Mechanics.  I was absolutely enthralled by the clever supply-and-demand mechanic that floated the prices of the different components based on the players' decisions.  I was also fascinated by the steel playing board that Ben had made for his prototype, complete with hex nuts for playing pieces.  It was a heavy, substantial piece of work.  More to the point, Mars Needs Mechanics was an elegant, fun game, so I was delighted to hear soon afterward that publication was picked up by Nevermore Games.

So today a box arrived from Nevermore Games, and I was very excited because I remembered how much I'd enjoyed Mars Needs Mechanics the one time I'd played it.  When I opened the package, I found something special.  Not only had Stephen arranged for me to receive a copy of the game, but the package also included a metal box of components and a canvas tote bag containing a steel game board very similar to the prototype that I'd seen at WBC.  A letter from Nevermore's John Sizemore explained that this was one of only 25 hand-made steel game sets.  On the back of the game board is a copper plate signed by Ben Rosset and artist Bryan Fischer, numbered 22/25.  This set is absolutely extraordinary. 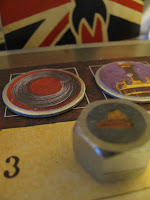 I am overcome with emotion from the significance of this wonderful gift.  It's a genuine pleasure to know Ben personally, so to have such a special version of his first published game is truly meaningful.  Most of all, Stephen's gift represents a profound gesture of friendship for which I am deeply grateful.  Without even having opened the box, Mars Needs Mechanics has become the most personally significant game that I own.
Posted by Paul Owen