Targi: The women prevail among the Tuaregs 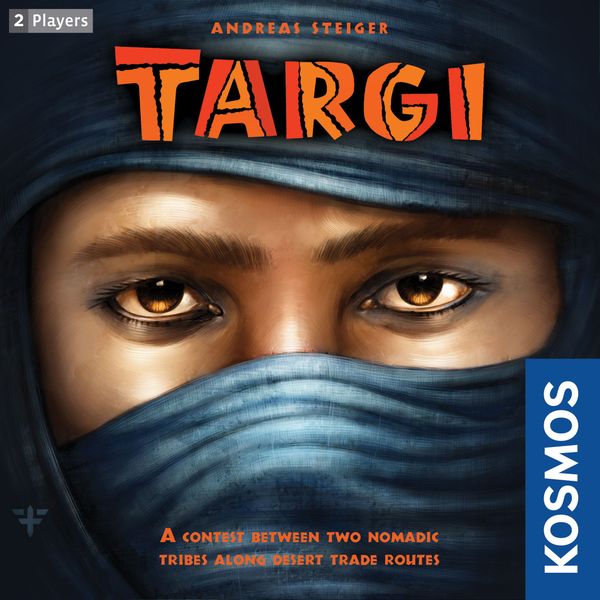 At the World Boardgaming Championships, I'd picked up a copy of Targi (designer Andreas Steiger, artist Franz Vohwinkel, publisher Z-Man) at the Z-Man booth.  As I mentioned at the time, this title was on my wish list because the French blog Gus and Co. listed it among their top two-player games of 2012, so I picked it up as something Kathy and I would like to try out.

We're on a long weekend to celebrate our neighbor's daughter's wedding, so we brought Targi along for the trip.  The theme centers on the Tuareg people, whose men are referred to as Targi and the women as Targia.  Designer Andreas Steiger tells us in his introduction that the male Targis cover their faces and the female Targia hold prominent roles in the family.

We really like this two-player resource management game.  A unique aspect of the worker-placement mechanic is that goods and tribe cards are arranged in a matrix on which players alternately claim border cards with their Targi pieces that claim actions as well as effectively lock out an entire row or column of actions from the opponent.  Targis claim not only border actions but the interior actions that fall on the intersection of the row of one border Targi and the column of another.  These interior goods and tribe cards in the array are replaced as they are used, so available actions change from one turn to the next.

In our first game this morning, Kathy did an excellent job of choosing combinations of tribe cards that worked together to build a strong collection to accumulate resources and score victory points.  She ended up with a commanding win, and we both agreed that this game has a lot of potential for our future cocktail hours.
Posted by Paul Owen