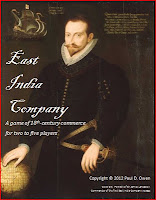 My mother-in-law Agnes enjoys the occasional boardgame, and she is not afraid to try out something new.  She was even one of my early playtesters of East India Company in its most rudimentary form.  Sunday afternoon, she agreed to revisit the game in its latest rendition, along with my wife Kathy and son Patrick.  I am grateful to get this shakedown of the current form of rules about three weeks prior to the Unpub 3 event in Dover on Martin Luther King weekend.

I have also sketched out some changes I want to make to the tiles to increase the likelihood of trade triangles, but I haven't made those changes yet, so I can at least evaluate the above two changes somewhat in isolation.

Both of the above changes had their desired effect.  The re-ordered turn sequence makes much more sense than my previous version.  Having ship operations come first and having start player determination occur at the very end of each turn fits very intuitively with the natural course of thinking about the game.  I really like the new sequence of play.

Starting with more tiles on the board shortened the game dramatically.  We finished our game in 90 minutes, right in my target range.  The game ended on the 17th tile (the maximum, which I previously established was the most likely outcome).  Under the new setup rules, we started our four-player game with eight tiles on the board, so the game ran nine turns.  We had four players for the first two turns, then (after Patrick dropped out - see below) three players for the remaining seven turns.  With a total of (4 players x 2 turns) + (3 players x 7 turns) = 29 player turns in 90 minutes, the average player-turn came to 3.1 minutes per player per turn, considerably better than the previously measured 3.7 minutes per player per turn.  That improvement suggests that the modified turn sequence streamlined the game flow as well.

Two things occurred in this playtest, though, that made clear I still have some work to do.  First, Patrick got hit by pirates in South America early in the game.  He had an opportunity to insure his ship, and he had one coin left at home to pay the premium, but he opted to risk the pirates, which he had an 11-to-1 chance of evading that turn.  As luck would have it, the pirates struck and wiped out his cargo.  He was left with an empty medium galleon in South America and one coin in Europe, which meant he'd have to take out a loan just to finance another venture.  He dropped out of the game instead, not with any hard feelings but just with the acknowledgement that he was in a hole that he'd have a very hard time digging out of.

It might reasonably be argued that he was reckless not to insure his ship against pirates when the potential consequences were so catastrophic.  After all, "East India Company" is at least in part a game of risk management.  Nevertheless, this experience puts me in something of a conundrum with regard to pirates.  In past games, they introduced a real tension as players had to manage finances to cover insurance costs or risk having cargos wiped out by piracy.  In the 8 November playtest at Game Parlor, however, it happened that the pirates never actually struck; the players' feedback suggested that pirates were an insufficient threat and ought to strike more often.  There was also a proposal of introducing privateers, in which players could invest in efforts to influence piracy to affect their rivals.  But what happened yesterday, and what happened at the WBC playtest last August, suggest that pirates can have a devastating and irreversible effect on the game.  I might actually have to mitigate their impact to make them more manageable and less arbitrarily destructive.

The second thing that went differently in this game was that there was almost no competition among the players.  Partly because Patrick dropped out but also because we started with so many tiles on the board (eight for a four-player game with the latest rules adjustment), we all kind of went our separate ways.  I invested first in silver and then later in spice.  Kathy shipped tea, and Ag stuck with tobacco and timber, so none of us really had to deal with competitive saturation of the markets.  We were all largely able to sell goods at full price in Europe.

Now, what was interesting is that neither Kathy nor Ag bid against me for the right to tariff the spices in China, so I put a tariff in place.  That tariff further disincentivized them from competing with me in spice.  I had borrowed aggressively to build a large full-rig ship, which I then loaded up with enough spices to pay off all loans in a single shipment.  So it might be that the only reason that we didn't compete was that Kathy and Ag chose not to do so, which left me free to sell the high-profit spice at full market value.

But thinking about the numbers, in what ended up being a three-player game, there were many open markets, which meant little forced competition among us, so no markets saturated and no prices were pushed down from competitive selling.  I think I may have to look at reducing the number of open markets for games with fewer players.  I need to give some thought as to how to do that.

Fortunately, that's what playtesting is all about.  I've often marveled at how some polished games handle different numbers of players.  Clearly, heavy playtesting went into making adjustments and modifications to ensure that the right competitive balance remained in place as the game scaled from two to five players.  That's the kind of scaling I have to put in place with EIC to ensure that it works across the spectrum of player numbers.

More work to do ...
Posted by Paul Owen