After-school special: East India and Tsuro of the Seas

My friends Frank Hodge, Keith Ferguson, and Mike R. and I got together this evening for a couple of games at Game Parlor in Chantilly, Virginia, after work today. 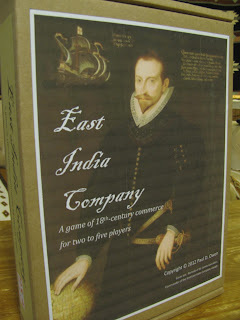 East India Company
The guys were gracious enough to agree to another playtest of "East India Company."  It was Mike's first time with it, but Keith and Frank had each played at least once.  As I mentioned in my previous post, I increased the ship speeds, allowed for ship upgrades as an alternative to building ships, and added a new game-end trigger condition.  The first two measures were intended to improve the cost-effectiveness of investing in ships, and the third was intended to shorten overall game length.

I was concerned with something I learned in my last playtest, when Darrell Louder won by starting with a medium ship and never taking a loan or investing in another ship but simply running goods all game long.  I want the game to motivate players to take calculated investment risks, and I certainly don't want the game to have a degenerate strategy.  So in tonight's run-through, with the new rules in place, I emulated what I called the "Quiet Louder" strategy to see if I could reproduce Darrell's results.  On my first turn I upgraded the small Brigantine to a medium Galleon, and thereafter never bought or upgraded another ship.

I'm very happy with one particular aspect of the game - the fact that the variable market tiles make for a highly re-playable game in which the market environment can vary greatly from one game to the next.  My last playtest had mostly ivory and silver come out, with only very late-appearing timber and no spice at all.  Tonight's game, by contrast, had "China produces spice" come out at the start of the game as well as "North America produces timber," so that players had a ready supply of timber as well as a distant market to incentivize building Full Rig ships to chase after the high-profit spice.

So as the other players raced to build Full Rigs to ship spices from China to Europe, I had the tobacco market largely to myself.  Mike and Keith got heavily into debt at first, and Frank did too, a little later, but I stayed true to the "Quiet Louder" strategy and never took out a loan or bought another ship after the first turn.  But my rules modifications had the desired effect.  Although the spice market got pretty heavily saturated in Europe, everybody else was able to pay off their debts before the end of the game as well as build up a dividend bonus.  My tobacco profits were soon far outstripped by the other players' big spice run pay-offs.  Keith won with a commanding 86 points to Frank's 76, Mike had 62, and I came in a distant fourth at 40 points.

During the game, we attracted the attention of one of the patrons of Game Parlor, an Italian by the name of Claudio who was killing time before his flight out of nearby Dulles International Airport.  He asked where to buy the game we were playing.  Of course I had to explain that it was still in playtest and didn't even have a publisher yet.  I wished I'd had my business card with me and had to settle for writing down my information on a scrap of paper torn from my rules.  (I think I'm going to keep a small stack of business cards right in the game box from now on.)  Claudio bought a copy of Leonardo da Vinci before leaving for the airport.

Game length seems to be more under control.  We ran about three hours start to finish, including rules explanations and a few short breaks during the game.  Nobody seemed to feel that the game was slow, although Mike observed that there was some occasional down-time.  Interestingly, we ran the maximum possible number of turns under the adjusted game-end trigger.  With the revised conditions, the maximum number of tiles that can come out is 17.  Since a four-player game starts with five tiles on the board, that means that we played 12 turns in three hours, for an average of 15 minutes per turn or 3.7 minutes per player per turn.  In the previous playtest under the original conditions, we had the maximum of 20 tiles come out in a five-player game that started with six tiles on the board, which means we played 14 turns in four hours and 20 minutes, for an average of 19 minutes per turn - which is also a pace of 3.7 minutes per player per turn. So the game pace seems to be consistent, and shortening the number of turns to game-end remains the key to controlling overall duration.

I took quite a few notes based on everybody's feedback, and I'll be sorting through those to figure out how I might continue to tweak the game.  It still needs some adjustments, I think, but it is taking a pretty solid shape now, and I'm feeling good about it.  For all of their comments, everybody thought it was a lot of fun.

Tsuro of the Seas
I'm a big fan of Tsuro, and I never feel as though it gets to the table often enough.  I'd heard of the recent variation, Tsuro of the Seas (designers Tom McMurchie and Jordan Weisman; artists Ilonka Sauciuc and Dawne Weisman; publisher Calliope Games) and was really interested in trying it out.  Keith just happened to have his copy in the car, so we gave it a spin.  We were joined by "Mike from Boston," whom I'd met a few months ago when we were testing my "Supply and Demand" game, so we had five players for Tsuro of the Seas.

At its heart, TotS is Tsuro with sea-monsters, called daikaiju.  And after one play, my impression is that the sea monsters are essentially instruments of die-rolling havoc.  Whereas Tsuro is an elegant exercise in logic and planning with a little bit of tile-draw luck, TotS is has all the finesse of a kindergarten class crashing a poetry reading.  It might be better called Tsunami than Tsuro.  Keith was knocked out of the game by a sea monster in the second turn of the game.  The rest of us dodged around the  random-walk monsters as they prolonged our game by removing tiles from the board almost as fast as we were laying them.  I had managed my path very nicely and had isolated myself from the daikaiju until the dice rolls dropped a new monster on my location and summarily removed me from the game as well.  Eventually Boston Mike was able to eliminate Frank and then Mike R. through fortuitous die-rolling combined with some prudent tile-play to stay alive.

Reviewers of TotS seem to like it for the new flavor that the daikaiju introduce, and for the fact that player strategy now has to take an extra dynamic element into account.  For my part, however, I find it an annoying addition of random bad stuff that doesn't add to the quality of the game.  I am reminded of a criticism I read of Iron Dragon a year and a half ago that suggested that the event cards simply set players back at random without regard to progress or strategy and that the game played better without them.  I think I've come to the same initial impression after one playing of TotS about the daikaiju - better to simply play Tsuro and enjoy it for what it is, rather than add the noise of random destruction to the "way of the path."
Posted by Paul Owen