Just a quick note that I've made some modifications to rules to "East India Company" based on the 8 November playtest.  The most drastic change was to move all the ship operations and unloading steps from the end of the turn to the beginning of the turn.  "Mike from Boston" made this recommendation after having read the actual rules while watching us play.  It makes a lot of sense for several reasons.

First, simply from the perspective of reading the rules, it makes more sense progressively to understand ship movement as a context for the rest of the turn sequence.  Since I'd constructed the rules more or less in turn sequence order, there's a logical appeal to this restructuring.

Second, I'd had the comment at the WBC playtest as well as the most recent one that the "Start Player Determination" phase took a little getting used to, being positioned in the middle of the turn sequence.  Moving all the ship operations from the end of the turn to the beginning now leaves "Start Player Determination" as the last step in the turn, which feels much more intuitive.

Third, the end-game sequence felt a little off-kilter, having the game run through the turn sequence and then jump back to execute a "Final Dividend Declaration Phase."  With the new turn structure, since the game end is triggered in the "New Colony Phase" just prior to dividend declaration, I'm thinking I'll just have game end triggered immediately, execute final dividend declaration, and determine a winner.  That is much more abrupt, but also more intuitive, as well as conducive to shortening the game (another goal in my changes).

Another major change is to increase by two the total number of tiles on the board at the beginning of the game.  Since I'm not changing game end conditions, I'm effectively shortening total game length by three turns (two at the beginning from initial set-up and one at the end from not having "one last turn" after game-end trigger).  So, if my playtest empirical data are any indication, I'll be shortening the average game by 3.7 x 3 = 11 minutes per player.  That's 22 minutes shorter for a two-player game and 55 minutes shorter for a five-player game.  I think that will come out just about right for where I want the game to be - in the 120-150 minute range. 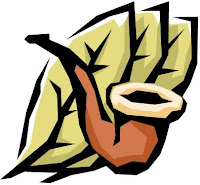 One minor alteration I'm thinking about is more cosmetic and user-friendly.  One of our playtesters is color-blind, so we continually needed to help him identify which colored glass pebbles represented which commodities.  I'm thinking I'll go to counters with icons for each of the six commodities (a la Le Havre), and duplicate those icons on the tiles as well.  The game will be a little closer to being language-neutral as well that way.  Another minor change is to add a 20-Indie coin, since we actually didn't have enough money in the game to cover all the spice sales and had to write bank I.O.U.'s on paper napkins to keep track of the money.

These changes are a little more significant than the last couple sets of tweaks that I've made, so we'll see in the next playtest (whenever that may be - before UnPub 3, I hope) if I've actually made things worse.
Posted by Paul Owen