I spent the latter half of my day at Congress of Gamers entirely in the game design room.  There I met John Moller of Car Trunk Entertainment.  He and I talked quite a bit about our philosophies on game design.  Rather than go into details on some of John's thoughts, I'll hold them for a subsequent post. 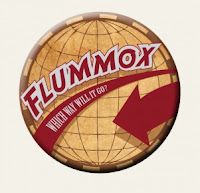 On to the games then:  John first showed me his game Flummox (artists Bill Bricker and Darrell Louder, publisher Clever Mojo, planned release March 2012), which involves taking actions and activating cards to move a marker (the "Flummox") among the players' arrays of cards in an effort to score points by having the Flummox end up on one's own array - or cause an opponent to lose points by putting the Flummox on his or her array, depending on whether the Flummox is "good" or "bad" in that turn.  I found this game to be a fun exercise in logic and tactics, vaguely along the lines of Guillotine from the standpoint of manipulating the arrangements of cards to gain points and thwart opponents  I think John's action-driven mechanism is a little more elegant than Guillotine, which depends on a separate action card deck to manipulate a line of nobles.  In Flummox, a player may exercise only one of four actions and then activate only one of two cards on the ends of his or her array in order to move the Flummox or modify the players' arrays on the table.  The cards themselves have only a few different characteristics and types, but they combine in a way that makes for some fascinating conundrums.  I really look forward to trying this game again.

John also showed me his design contest entry Family Reunion, a rather bizarre little game that I came to think of as a cross between Concentration and a kind of two-dimensional Guillotine.  (Maybe I just have Guillotine on the brain today.)  Again, this one provides a neat logical challenge, but I found the unique behavior of each family member's card to be a little overwhelming, at least in a first playing.  I imagine I would get the hang of it before too long.  I like the game, and I want to try it again as John refines it, but I can't decide whether I like it as much as Flummox.

John was good enough to try Trains Planes and Automobiles with me, along with Tim, who'd played it once already.  This would be my third demo of the day.  I think I was tickled just that Tim wanted to play it again.  For the second time that afternoon, I had ridiculous card luck with airline tickets.  Usually, games I've played have all been close, and I always lose.  At Congress of Gamers, I was winning by substantial margins.  I think I'm going to pay close attention to the course of the games I play to see whether card luck is too strong a factor.  Right now I still think that card luck can be mitigated with good flexibility and use of the discard-replace rule (or even the trading rule, which no one seems to use).

After dinner, Tim Hing, T.C. Petty, and I got The Speicherstadt out of the game library.  Tim had played before, but T.C. had not.  I had only played in two-player sessions with my wife Kathy at home, so I was looking forward to playing a three-player game.  The Speicherstadt has a nice bidding mechanic in which demand for available cards determines their prices.  The first bidder for a given card has the first opportunity to buy, but at the highest price.  If he elects to pass, the next bidder in line has an opportunity to buy the same card for one coin less, and so on until a bidder decides to buy the card for the available price (or the last bidder passes, in which case the card is discarded).  Money is very tight in this game, and bidding from a strong position can count for a lot if the right cards come up for sale.  I did very well in this game with a dominating position in firemen and the completion of some pretty hefty contracts.

T.C. then demonstrated Good Ol' Punchin' Planes, a prototype two-player game on the hilarious premise of pre-World-War-I airplanes that race alongside one another while pugilists stand on the wings and engage in fisticuffs.  Simultaneous card play determines both the relative motion of the two aircraft and the trading of blows between the two fighters.  Terrain obstacles over the race course (yes, these airplanes fly very low) present additional hazards to the pugilists, such as bridges, telegraph wires, and a barn.  I played against Josh Tempkin, moderator of the design contest, who managed to achieve a more crowd-pleasing performance than I did and therefore won the event.  Afterward, Josh and I had some ideas for TC to give a little more depth to the "combat" part of the game, but I have to say that it was good for a hearty laugh more than once during the race.


Upcoming posts:  What I bought and sold at CoG, and notes from a conversation with designer John Moller
Posted by Paul Owen

Email ThisBlogThis!Share to TwitterShare to FacebookShare to Pinterest
Labels: Congress of Gamers, Trains Planes and Automobiles