Most of my gaming experience on a week to week basis comes at home with my wife over cocktails - this time of year, out in the back yard next to the fire bowl.  But on occasion I will get together with friends after work at Game Parlor Chantilly, which is not far from where most of us work and therefore a convenient stopping place in the middle of the week for a game session.  We call it an After School Special, and sometimes even call it by its acronym... 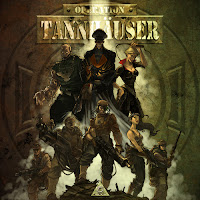 This evening my buddies Grant, Keith, Brian, and I got together and started off with Tannhauser (designers William Grosselin and Didier Poli, artist Didier Poli, publisher Fantasy Flight Games).  I had first seen this game demonstrated at PrezCon a few years ago, and I have to say that I was mildly intrigued but also a little put off.  The demo was a little rushed, not well explained, and played through haphazardly, so I walked away thinking not much of the gameplay.  I have a very different impression of it now - a fun shoot 'em up skirmish game with a few neat special-ability twists.  In this evening's game, we paired off two players against two, each team controlling three heroes and two troopers.  Grant and Keith seized control of the center hallway of the house, but Brian and I managed to do some serious damage with a couple of hand grenades and some ridiculous dice luck.  We ended up winning in a game that probably shouldn't have been so lopsided.

Grant had to leave, so Keith, Brian, and I broke out my very favorite three-player game, The End of the Triumvirate (designers Johannes Ackva and Max Gabrian, artist Andrea Boekhoff, publisher Z-Man Games).  This was a very close game all the way through.  There were times when I really thought I was going to pull off a second election as consul and win the game, but instead Keith couldn't be stopped in achieving a competency victory despite best efforts from Brian and me to hold him back.  I am continually amazed at the knife-edge balance of this game.  It is not a symmetric game like many Euros, where play balance is a foregone conclusion because each player starts in an identical situation.  Yet there is no position in Triumvirate that has any kind of presumed advantage, or can be knocked out easily.  I've played three times now, and every time I'm left awestruck at how tight this game is.

With a little time left to kill, we decided to play Citadels (designer Bruno Faidetti, numerous artists*, publisher Fantasy Flight Games), which is right now my favorite game of all.  This was the game that kept us up until 2:00 in the morning at World Boardgaming Championships, after we'd each already had a full day of tournament gaming.  This time it was my turn to pull out the victory.  As always, it was a game full of second-guessing and back-stabbing.

Email ThisBlogThis!Share to TwitterShare to FacebookShare to Pinterest
Labels: Citadels, End of the Triumvirate