Okay, after this, I'm done posting about Congress of Gamers (for now).

I still remember the best advice anybody ever gave me about a gaming convention.  It came from Justin Thompson as a recommended goal when attending PrezCon:  "Learn at least one new game; buy at least one new game."  Over the last few days, I've posted about the games I learned in the game design room at CoG.  But the convention experience wouldn't be complete if I didn't fork over a little cash to bring something home to play. 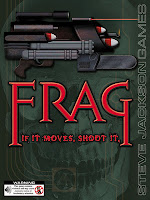 For my 15-year-old, I picked up two Steve Jackson titles.  The first was Zombie Dice from Our Game Table.  I'm not a fan of zombies (in fact, I despise zombie games), but heck, he likes zombies, and he likes dice.  It's a no-brainer.  (Sorry.)  Also, literally at the eleventh hour, Vince Lupo was packing up his stuff in the designers room when he held up a box and said, "Anybody want to buy Frag?"  It took maybe one round of haggling for me to take it off his hands.  The cover says, "If it moves, shoot it."  So that's another game that my 15-year-old seems likely to enjoy.  Vince also threw in a set of hand-made maps to augment the game, which I think is pretty cool.

For my ten-year-old, I picked up a clever little tile-placement game called Continuo (designer Maureen Hiron, publisher U.S. Game Systems) at the Bring-and-buy flea market.  It's designer touts Continuo as a "one-rule game for the whole family."  I look forward to trying it out with my son.  (I also got him four alien dice at Our Game Table, because, you know, he likes UFOs, and he likes dice.  It's not rocket science.) (Sorry again.)

For my wife Kathy and me, I bought Roma (designer Stefan Feld, artist Michael Menzel, publisher Queen Games) for a very reasonable price at the Bring-and-buy.  I'd read at least one positive review of this as a good game between spouses.  We've played through it once on a "we're not playing to win, we're helping each other learn the game" basis, and I think we're going to like it.  I can't wait to play it again on a "now that we know the game, we're out for blood" basis.

Meanwhile, I dropped off five games at the Bring-and-buy flea market to sell.  Of those, it was the two role-playing games that attracted buyers - En Garde! (the TSR role-playing rules set for 17th century rapier-dueling and derring-do) and James Bond 007: Goldfinger (a scenario module for the Victory Games RPG based on the Ian Fleming series).  I don't think I'll miss them, and I hope somebody out there gives them a new lease on life.
Posted by Paul Owen

Email ThisBlogThis!Share to TwitterShare to FacebookShare to Pinterest
Labels: Congress of Gamers