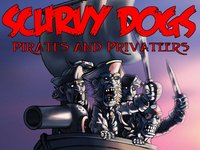 How seldom do we read about boardgames in major media, and yet in Monday's Washington Post, Monica Hesse's article "Pirate boardgame creator rolls the dice on a jolly good pastime"* features game designer Darren Gendron and his appeal for funding to launch his first game, Scurvy Dogs, via Kickstarter.

Many game-familiar readers may already know of Kickstarter, an internet phenomenon for generating venture capital for self-published games and other creative enterprises.  Kickstarter allows aspiring self-publishers to seek contributors in exchange for promotional interests such as copies of games, supplements, and other bonus paraphernalia at graduating levels of contribution.  (Kickstarter's scope extends far beyond games to a broad variety of creative enterprises, such as art, photography, dance, film, and fiction.)

Monica Hesse finds Darren Gendron and his associates Alex Chambers and Ralph Pripstein in their playtesting laboratory, up to their elbows in pirate iconography, one eye patch short of a cliche.  Clearly they enjoy playing the game, honing its rough spots, and indulging in their tabletop roles as buccaneers.  Gendron intends to publish his creation himself once he has a finished product, but that will require some capital outlay, on the order of $20,000 by his estimate.  And it is through Kickstarter that he hopes to find that funding.

I'll add that I found Gendron's assertion, "We had seen a few games involving pirates before," to be either understated or naive.  A search for "pirates" on boardgamegeek turns up three pages - hundreds of entries - including the recently popular Merchants and Marauders.  Gendron sees a gap among pirate-themed games with respect to the land-based exploits of pirates and seeks to create something new in the pirate game genre.  Nevertheless, Brian Tinsman, author of Game Inventor's Guidebook, warns that a key failing of many new game designers is not adequately researching the market beforehand.  As much success as I would hope Scurvy Dogs to find, I'm not sure I would throw yet another pirate game onto the pile.  (Still, my friend Paul R. insists that market saturation is in the eye of the beholder; even if there are a hundred pirate games, the best game is still the best game.)

Monica Hesse betrays a certain naivete of her own regarding the boardgame world.  Early on, she characterizes Gendron's effort in the context of Monopoly, Risk, Scrabble, Sorry!, Pictionary, and Clue.  No regular gamer would take this comparison seriously.  Late in the article, though, she puts Gendron's game more properly in the realm of


"designer games" or "Eurogames," most of them published by smaller companies in Europe and North America.  While some have become successes - Ticket to Ride is closing in on two million sales; Settlers of Catan has more than 15 million - it's still a niche market, filled with hundreds of obscure games trying to land on top.

Gendron's Kickstarter campaign appears to have promise of success, even as it approaches its 6 September deadline.  At this writing, the game has over $15,500 in pledges, which is $4000 more than at the time of the Washington Post article just two days ago (and helped, no doubt, by that bit of publicity).

One of the most successful recent enterprises in this regard is Far West, a game set in "a fantasy world based on the tropes of the spaghetti western and Chinese Wuxia, mixed with steampunk elements."  Go figure.  This unlikely-themed concept attracted nearly ten times its $5000 goal in pledges.  At WBC, DiceHateMe featured Carnival, the set-building card game by The State of Games' own Cherilyn "Monkey238."  Carnival's funding currently exceeds its $5000 goal more than twice over, less than two weeks since its kick-off.

But Scurvy Dogs, Far West, and Carnival are not alone.  By my unofficial count, at least 83 games seek funding on Kickstarter at this writing.  There's an interesting question of entrepreneurial economy here:  Just how many games (let alone other creative enterprises) can the world of venture capitalists lift off the ground in a matter of weeks?

So here's to the success of pirates and carnivals and all other conceptions of game themes.  More to the point, here's to the broader exposure and acceptance of quality games among the general public (not just us boardgame geeks).  All the more to play.  Semper ludere.

*At this writing, this link to Hesse's article is available at washingtonpost.com, but it is reasonable to expect that at some point the article will be archived and the link changed.
Posted by Paul Owen