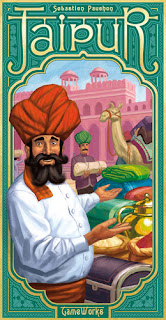 It was time to try out one of my acquisitions from the vendors' room at the World Boardgaming Championships, so for the last two afternoon game sessions, my wife and I have tried Jaipur (designer Sebastien Pauchon, artist Alexandre Roche, publisher Game Works).  I picked this up based largely on a Dice Hate Me review as a good candidate for a two-player game, and it has turned out to be an immediate hit with both of us.

General play description
Jaipur's card deck includes cards representing six different commodities and a number of camels.  A market in the center of the table always contains five cards in any combination of commodities and camels.  At any given time, each player has a hand of up to seven commodities and, in a face-up stack on the table, a herd of camels.  In his turn a player has may perform one action from among several options. 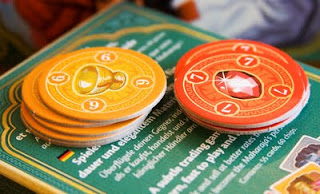 General impressions
I have to say, I like this game a lot after just two plays.  There are a few genius elements to the construct of this game.  First, for each commodity, there is one more card in the deck than there are tokens available to sell them for.  Second, the tokens for a given commodity can vary in value, with the more valuable tokens coming up later in the round.  Third, the hand size limits the degree to which a player can hoard a given commodity.  So a crucial element of the game is deciding what to collect, how long to keep collecting, and when to sell them off and free the hand. 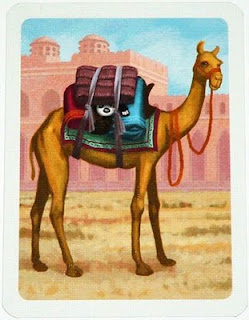 The camels also add a decision twist to the game.  It is tempting to simply keep a majority of camels and guarantee the camel bonus token of five points, but camels are useful for exchanging into the market (if there's room in your hand for more commodities).  But putting them into the market means your opponent can take them.  Oh, the agony!

My wife Kathy has managed to win four of the five rounds we have played, which is to say that she won both games that we've played so far, one by shutout.  And not by a fixed strategy or card luck, either.  This game seems to reward strategic flexibility.  There's something to be said for accumulating leather, the most plentiful commodity, to sell five at once and pick up the big market bonus.  But diamonds, gold, and silver are so profitable that perhaps they can make up for the big bonus on leather.  And I already mentioned the agony of the camels...

I'm reminded a little of Ticket to Ride: The Card Game, from the standpoint that both players are drawing from a common pool of face up cards and trying to play combinations out of the hand to collect points.  But right now I'm thinking Jaipur is hands down the more fun game, and I'm sure we'll be playing it more soon.
Posted by Paul Owen