Yesterday was the last day of the Boardgame Players Association's World Boardgaming Championships 2011.  A record 1642 people attended WBC this year.  I met other designers, developers, and of course many gamers, including quite a few familiar faces from PrezCon.  And of course vendors, who were good enough to thin out my wallet in exchange for a few additions to my game shelf:

I've had my eye on Tech Bubble (designer Mike Nagel, artist Sean Cooke, publisher Worthington Games) for quite a while now.  We've really enjoyed push-your-luck games like Can't Stop and Incan Gold, so what I read about Tech Bubble makes me think it will fit right in.

Some time ago I did a survey in earnest for two-player games that my wife and I would enjoy, and Jaipur (designer Sebastien Pauchon, artist Alexandre Roche, publisher GameWorks) came up pretty high on the list.  DiceHateMe had a pretty funny review last April, including the following comment that caught my attention:


I love games like that.  I happened to see it for 20% off at the convention and picked it up.

And then I got to the Z-man booth.  As my good friend Grant G. said, "I never met a Z-man game I didn't like."  I was really hoping to find Traders of Carthage, but apparently that's been out of print for a while.  But I did find The Speicherstadt (designer Stefan Feld, publisher Z-man Games) an auction trading house game that I've had my eye on for a while but which sold out at PrezCon last February before I could make up my mind to buy it.  Luckily I wasn't so indecisive this year.

I needed even less deliberation to pick up Farmers of the Moor (designer Uwe Rosenberg), also at the Z-man booth.  This extension to one of my favorite games, Agricola, adds horses and peat to the farm.  I expect Farmers will bring a little "aroma" to our Agricola sessions. 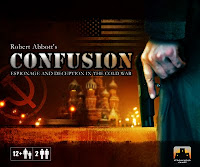 I had, unfortunately, blown my budget by the time I got to the Stronghold Games booth, where I encountered Confusion: Espionage and Deception in the Cold War (designer Robert Abbott, publisher Stronghold Games).  Oh, baby.  The DiceHateMe review of this cloak-and-dagger deduction game really brought out the evil laugh in me.  But how do you indulge your inner spy when you've got a bag full of games already?  Well, fortunately, Keith F. felt the same Cold War nostalgia I did.  (Oh, wait, he's not nearly as old as I am ... Keith, what grade were you in when the Berlin Wall fell?)  Nevertheless, Keith picked it up, somehow confident that he'd be able to get me to play it with him a few times.

Keith, Brian, and I sat down for two last games of the weekend - Trains Planes and Automobiles and Citadels, two more games that Keith bought on my recommendation.  (What a trusting soul.)  At the last minute, as the vendors were boxing up inventory, Brian ran back and grabbed a copy of Pandemic, because Keith and I knew that he wanted to buy it; he just needed a little encouragement.

So all in all, the three of us managed to stay entertained.  We drank beer, we competed in tournaments, we played games till 2:00 in the morning, we bought bags of games ... and yet none of us went home with a plaque.  Oh, well.  There's always PrezCon.
Posted by Paul Owen