Lately, as I've been compiling notes each week for the Kickstarter report on the Dice Tower News podcast, I've come to notice an evident seasonal pattern:  fewer boardgame projects tend to fund on Kickstarter this time of year.  In recent weeks, the number of projects likely to fund has been particularly low.  Do longer-term statistics bear out my recent observations?

As it happens, Kickstarter posted some statistics for 2014, and this graph caught my eye: 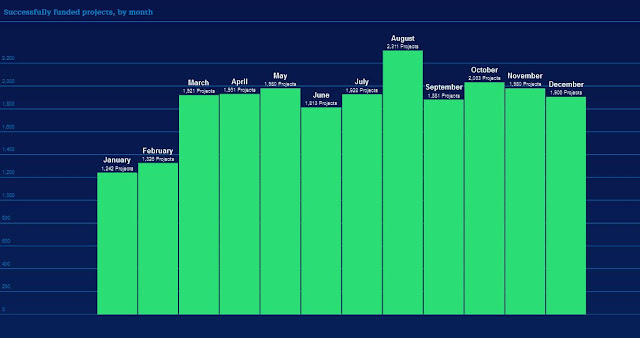 The winter dip is unmistakeable.  I first noticed the trend in December, but it is graphically clear that January and February were even worse in 2014.  Now, this graph goes across all successfully funded projects, not just games.  So I thought I'd compile a similar graph from Kickstarter specifically for projects in the "Tabletop Games" category, through both 2013 and 2014 to look for seasonal trends. 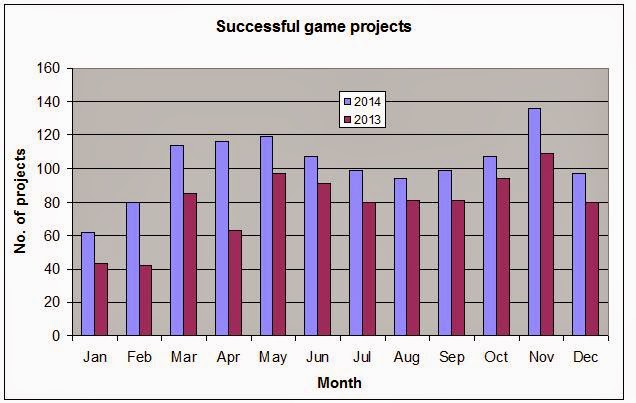 My first observation is that 2014 month for month had more successfully funded tabletop game projects than did 2013.  That's not altogether surprising; the overall Kickstarter trend has been positive for boardgames.  What's more interesting is that the seasonal peaks and dips were largely consistent from one year to the next.  December, January, and February were noticeable lows.  May and November were the best two months in both years.

Of course, I couldn't leave well enough alone.  I decided to look at total funding month to month for 2013 and 2014, and the results were a bit more erratic. 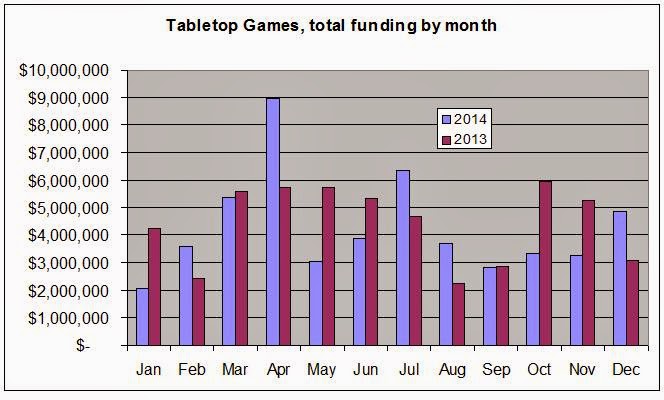 Some of the seasonal patterns are still present, like the dips in the winter as well as in August and September.  But there are some crazy variations in the data as well.  Although 2014 had the highest peaks (including a ridiculously high funding total in April* - though not in May), there were quite a few months where the 2013 funding level was higher than 2014, even though the number of projects was consistently fewer.

* I had a look at April 2014 to find out what drove the funding level to be so high relative to any other month for the last two years.  Here are the top ten projects that funded that month:

These ten projects alone accounted for over $6.5M of the nearly $9.0M in Kickstarter funding for 116 tabletop games in April 2014.
Posted by Paul Owen