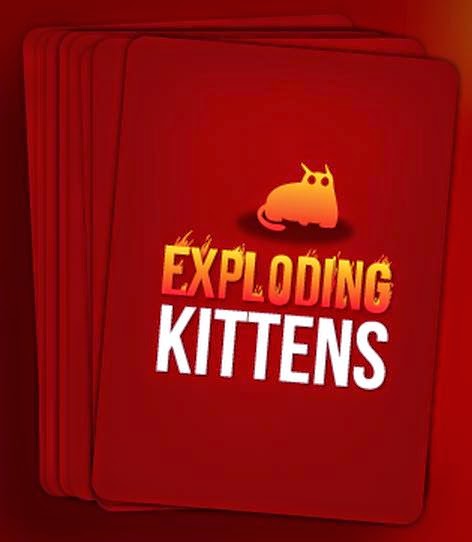 Okay, stop the presses.  This is the news item that we'll be talking about all year.  Out of nowhere, a card game has taken Kickstarter by storm and attracted (at this writing) over 106,000 backers to drop a modest $20 to $35 each - totaling over $4.1 million - on what amounts to a wacky-themed push-your-luck game - Exploding Kittens (designed and published by Matthew Inman, Elan Lee, and Shane Small).  It has already broken crowdfunding records for board and card games and shows no sign of slowing.

The good news is that there appears to be a real card game here, it really could be fun, and the publishers should be able to scale production to meet the extraordinarily high demand.

I expect to cover Exploding Kittens on Dice Tower News, Episode 368, which will post on Friday 13 February, six days before the end of the Kickstarter campaign.
Posted by Paul Owen

Email ThisBlogThis!Share to TwitterShare to FacebookShare to Pinterest
Labels: News