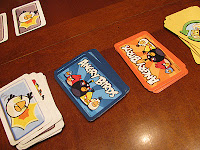 As a get-well gift, a friend gave our convalescing family member the card game Angry Birds (Mattel), based rather tangentially on the popular app.  As games go, it's largely a function of dice and card luck, but it's a fun diversion with young kids.  We played a three-player round this evening, and we got some good laughs out of it.

Because Angry Birds went so quickly, Kathy and I then turned to another card game with a different bent of humor, Chrononauts (designer Andrew Looney, artist Alison Frane, publisher Looney Labs).  We like this game as an interesting twist on the Fluxx line of shifting victory condition card games that Looney Labs has put out.  As time travellers, we saved the lives of Abraham Lincoln, the Archduke Ferdinand, and John Lennon.  Kathy (as "Timmy") managed to travel back to 1918 when, thanks to the Archduke Ferdinand's narrow escape, Europe had avoided a destructive war, enabling her to "patch" the timeline with a European economic boom.  Then she traveled ahead to 1980 and saved the life of John Lennon from his would-be assassin.  She then traveled on to 1999 and engineered Senator Lennon's success in passing a Constitutional Amendment to repeal the Second Amendment and institute a nationwide gun ban.

Although some of the alternate timelines in Chrononauts are a bit tortured, the game itself is fun.  Besides manipulating history, the game can be won by collecting artifacts from history (or the future), some of which make me laugh every time I see them (such as the "Obvious Forgery of the Mona Lisa," depicted with a mustache).  The fairly simple gameplay features some tricky decision-making and risk-taking, which makes for a good overall card game.
Posted by Paul Owen

Email ThisBlogThis!Share to TwitterShare to FacebookShare to Pinterest
Labels: Chrononauts