A new dimension to Qwirkle

I was amused to see that Mensa-select game Qwirkle (designer Susan McKinley Ross, publisher MindWare) had won this year's Spiel des Jahres, the German annual award for best new game of the year.  Amused because my family (and many Americans, I expect) have been playing Qwirkle for quite some time.  But I guess if it's new in Germany, it's new, and that makes it eligible for the SdJ award.  Of course, Qwirkle is a brilliant game - easy to learn, fun to play, while aesthetically pleasing at the same time.  So the award is well-deserved, if a little overdue.

So the other day, I happened to have some rare time on my hands and wandered into Game Parlor Chantilly, my favorite local game store.  I really didn't expect to buy anything but had my eyes open - and spotted Qwirkle Cubes, a game by the same designer and publisher that I'd heard of but never thought to look for.  I snatched it up, secured my purchase, and whisked it home to try it out. 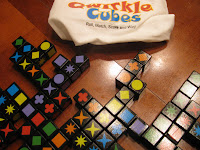 Kathy and I played it last night, and tonight our ten-year-old joined us for a game.  Qwirkle Cubes adds a nice Yahtzee-like dice rolling element in which tiles are replaced with dice, and the pattern you seek to obtain from your roll depends on the board configuration at the time.  Also important is that in Qwirkle Cubes, your "hand" of cubes is visible to your opponents (and vice versa), so that the risk of leaving an opening for an opponent to accomplish a high-scoring qwirkle is easier to evaluate.

The scoring in Qwirkle reminds me of basketball from the standpoint that the final scores are very high and usually close.  Tonight was no exception:  I won with 125 points, followed by Kathy with 122 and our son scoring a respectable 116 in his first game.

I can see Qwirkle Cubes quickly becoming a family favorite, perhaps even retiring the original SdJ-winning Qwirkle to the shelf for a while.
Posted by Paul Owen