How many dice are too many? 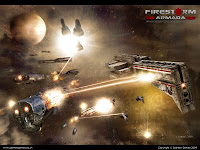 My good friend Grant G. hosted six of us for a Firestorm Armada battle on Labor Day weekend.  This was our first time at this science fiction space battle miniatures game for most of us.  As a fan of Wooden Ships and Iron Men, I could really get into this "space naval combat" genre.  Many tactics of the sea still hold true in space - concentrating firepower on one part of the enemy's formation while trying keep the opponent spread out and disconnected.  Other tactics have to change because of the different weapons' firing arcs:  Ships that are strongest when firing straight ahead but can't easily start up from a complete stop require a different deployment from those that are strongest firing broadsides in a line of battle.

One aspect of the game that got a lot of commentary was the dice rolling.  In combat, each ship has a certain number of six-sided attack dice (depending on range and firing arc).  Generally speaking, rolls of 4 or 5 score a  hit, while rolls of 6 each score two hits and add an extra attack die to roll.  So there is considerable potential for multiple extra rolls to score many hits even from a modestly-armed ship if the attacker's luck is good.

But what a few of us found a little unnerving and perhaps cumbersome was the sheer number of dice to roll and re-roll.  It was not uncommon for my Directorate battleship to attack with 17 dice all rolled at once.  Then I would have to sift through the results and set aside the fours and fives, count the sixes, then roll extra dice for each of the sixes.  If the extra dice also included sixes, too, then there would be more dice to roll on top of those.  Sometimes I might score in excess of 20 hits.  But the combat results might only translate into one or two points of damage to the target.  So it was hard to appreciate why so much dice-rolling was necessary for such unspectacular results.

I think some people like rolling huge handfuls of dice in their miniatures games.  As a mathematician, I can appreciate the probability distribution function that results from so many dice combinations.  But as a game player, I tend to prefer a roll-once-and-resolve combat system. 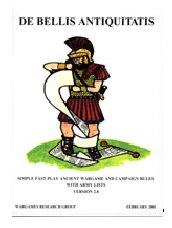 One of my favorite combat systems in a miniatures game appears in De Bellis Antiquitatis and others in the DBx series.  In those games, for each attack, the attacker and defender each roll one six-sided die.  Troop types, adjacent formations, and terrain can add or subtract modifiers to the die rolls.  The modified defender's roll is subtracted from the modified attacker's roll to determine a combat result for that attack.  The system is so elegant and the modifiers so easy to remember that with practice, it is seldom necessary ever to look up anything in a table.  "My spear attack your cavalry."  Roll, roll.  "Okay, three plus four is seven to your five plus  three is eight, I lose, my spear recoils."

There is such a thing as a Combat Results Table (CRT) that is too drastically sensitive to a single die roll.  Avalon Hill games had a tendency to have CRTs that were much more sensitive to the die roll outcome than to the size of the attacking force.  Efforts to alleviate this problem that were published in The General were themselves cumbersome, such as Steve List's "Resolving Fractional Combat Odds" in Volume 16 Number 5 ("Design Analysis").

Something of a combat standard that has emerged is the 20-sided die, or d20.  We often play WarZone, which uses a single d20 for each attack.  A probability distribution over 20 possible die outcomes provides sufficient granularity that small tactical factors have a noticeable but not overwhelming impact on combat, yet the die is easy to handle and the combat quick to resolve.

So the question that came to mind as I reflected on our Firestorm Armada experience was, what would a d20 CRT look like that reflected the Firestorm Armada combat outcome distribution but didn't require so many d6 rolls and re-rolls?  Well, I did a little spreadsheet-cruching to find out, and here's what it looks like:

Okay, so there's nothing intuitive about this CRT - nothing here you could memorize in the way of an algorithm and say, "I have three attack dice, I roll an 11, so that means I get two hits."  Maybe I need to go back to the drawing board on this idea.

Or maybe I just need to get used to rolling big handfuls of six-sided dice.
Posted by Paul Owen