I recently read Lewis Pulsipher's reaction to the rules of Risk: Legacy.  By way of background, Risk: Legacy (designers Rob Daviau and Chris Dupuis) is Hasbro's forthcoming variant on the familiar Risk line with an important distinction:  Over the course of each game, players will permanently modify board, cards, and rules with stickers and pens, so that each game modifies subsequent plays of that particular copy of the game.  I would not exaggerate to say that Dr. Pulsipher absolutely rejects this premise as merely destructive and, to some extent, commercially cynical. 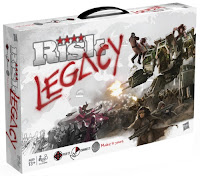 I can certainly see his point.  In fact, the tone of the rules and the box art suggest that semi-random alteration and rejection of the status quo feed the theme of "making one's own legacy."  The word "Legacy" itself on the box cover is written in pseudo-graffiti fashion.  There is almost a counter-cultural, anarchical, nihilistic, "anti-rules" sub-text in the rules themselves.  Game alterations are referred to as "scars" and "marks."  The rules require that some components be "destroyed" - thrown away, permanently removed from that copy of the game, not to be used ever again.  Even from the very first game, when each faction is assigned a special power sticker, an alternative special power sticker will be disposed of, never to be used in that copy of the game.

This is a fairly jarring concept for those of us who treasure our games over a lifetime.  Why would I ever willingly deface or dispose of a game component, unless I didn't particularly care about the fate of that game (or had another copy that I intended to keep pristine)?

There is a school of thought among the boardgamegeek.com forums that suggest that Risk: Legacy provides an opportunity to customize each game copy in a semi-structured fashion.  Perhaps that's the appeal of the game - the idea that when I play the game, I leave my mark - my legacy - on its actual physical structure for future plays.  Part of the fun in playing a role-playing campaign is that players would alter not only the state of their own characters but the condition of the universe that the game-master had constructed, and those impacts would last from one stage of the campaign to the next.  One might consider each play of Risk: Legacy to be a "sequel" of the previously played game.  In that respect, this might be a boardgame that carries the "campaign" concept a little farther than other boardgames have, more literally into its own physical condition.

For all of that, however, I'm not convinced that Risk: Legacy is a game that I can embrace.  My objection comes less from Dr. Pulsipher's abhorrence at the destructive nature of the physical game - a legitimate gripe in its own right - than from my own fear for the soundness of the gameplay itself.  I have seen people tinker with rules in other games at the expense of sound game design.  All the playtesting and careful game design in the world can't prevent players from implementing a house rule that makes a game too random, too long, or too monotonic.  The latitude that the rules of Risk: Legacy provide for altering the gameboard and cards has no apparent self-correcting mechanism to preserve a game-designer's sense for balance and game flow.  How fateful might it be that permanent modifications to the board could render the game unplayable, predictable, or even boring?  Perhaps I'm too sensitive to the quality of an exquisitely crafted game that provides a rich option-space and keeps all players in the game while rewarding sound decision-making.  But my fear would be that player-imposed changes to the rules and components might inadvertently result in a degenerate strategy, or a game that depends too heavily on dice luck, or a perpetual push-and-shove war of attrition.

The aspect of physical change in Risk: Legacy got me thinking about the degree to which we alter games that we own and play for a long time.  Components like cards, counters, boxes, and folding boards can show considerable wear over many uses.  To me, this wear is a classic sign of a well-loved game.  I have a number of Avalon Hill games that show a lot of "love" from many plays.  And any game that has score sheets, record pads, damage tallies, or any similar written artifact leaves its own legacy of games for future reflection.  Games with written simultaneous movement leave a record of so much detail that the game could almost be reconstructed like a baseball box score.  So in a manner of speaking, some games have always left a trail of artifacts from past plays.  They don't necessarily alter the way future games are played, but they do constitute a legacy of an individual game copy, after a fashion.  And for a game that has been frequently enjoyed, there's a certain sentimental value to that legacy.