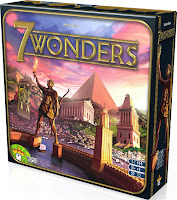 Last week our friend Jeff W. hosted Sheila D., Keith R., my wife Kathy, and myself for dinner, with the stipulation that I serve as "game sommelier."  I brought several boardgame options but had a special desire to introduce the group to 7 Wonders (designer Antoine Bauza, publisher Repos Production).  After a marvelous steak dinner prepared by master chef Jeff, we cleared the table and pulled out the game for a little run-through.

I enjoy 7 Wonders for a number of reasons.  It's relatively easy to teach.  The components are beautiful.  All action is simultaneous, so you are never waiting for your turn.  Everybody is in the game until the very end.  There are several different ways to win.  Once everyone is familiar with the rules, the game goes pretty quickly.  And most of all, it's fun, with just enough strategy to demand some brainpower.

The process of explaining the rules of a game is a real skill, one that I feel I'm still developing.  As I went over the rules to 7W, apparently I introduced some confusion regarding how to use resources to build structures and how to purchase resources from your neighbors.  It took a while for everyone to realize that building a structure doesn't "consume" a resource production card, and buying a resource from a neighbor doesn't "transfer" that card from one player to another.  So I still have some room for improvement as a game "explainer."

It's also important to get all the rules right.  Previously, one rule that I had forgotten is that you can't build two of the same structure, like two Barracks, for example.  My friend Keith Ferguson, whom I'd taught the game a few weeks ago, learned that the hard way in competition at PrezCon.  During one tournament game, he ended up having to give up one of his redundant (and therefore illegal) structures for three coins.  "Oh, sorry, man.  Missed that rule....."


So back to our recent game last week:  Jeff had the Temple of Artemis, Kathy had the Lighthouse at Alexandria, Keith had the Colossus of Rhodes, Sheila had the Pyramids of Giza, and I had the Hanging Gardens of Babylon.  People got the hang of the game pretty quickly, and it was clear early on that Sheila was starting an arms race.  I think she was worried about Keith's Colossus giving him extra military power in his second stage.  As she put it later, she could understand the value of building up her military, so that was the approach she took.  Her neighbors Keith and Kathy tried to keep up, and in so doing did some fair damage to Jeff and (especially) me.  For my part, with the Hanging Gardens, I had built a number of scientific structures in pursuit of a "technology" strategy, but somehow - inexplicably - ended up in last place.  Sheila's military superiority and completed pyramids won the day quite handily.

Jeff had mentioned earlier that he had a copy of Rail Baron (a 1977 Avalon Hill title designed by R.S. and Thomas F. Erickson), so after our game of 7W, we had him pull it out and teach it to us.

Learning Rail Baron took me back to the days when I played Avalon Hill games as a teenager.  It was a remarkable contrast in standards of game design and production between two eras, and really two different markets in boardgaming between my early gaming days and today.  In the 1970s, Avalon Hill tried to develop games as models of real-world decision-making.  So the railroads in Rail Baron reflected actual railroad companies and routes at the height of the rail industry.

The early game of Rail Baron is a bit mechanical, as most routes are unowned and therefore traveled at little expense to the players.  Destinations are largely determined at random, and so players roll dice and move until they reach their destinations and earn money.  It is with the opportunity to invest in a railroad company or locomotive upgrade that the game begins to get interesting.  Even so, the first few railroad company purchases are largely inconsequential, as it is relatively easy for opponents to avoid having to travel on your rail line and pay through the nose for passage.

It was rather late in the evening when we were each beginning to purchase our second or third railroad company, and we regrettably did not have the stamina we might have had in the 1970s to continue the game to its conclusion.  But I could see, as we began to buy up all the railroad companies in the southeastern United States, that the next player to draw Miami as a destination would have to pay somebody for passage aboard that opponent's rail line, and that would be where the game would really get interesting.  I was really intrigued at the notion of trying to dominate a region in the interest of forcing payment and gaining some return on the investment.  We just never got to that stage in the game before we had to call it quits.  Too bad, too; I was just starting to get my avaricious capitalist tycoon on.

Kathy described her impression of Rail Baron as something like railroad Monopoly, and I could see her point.  The game progressed with gradual accumulation of property (indeed, the railroad company title cards closely resemble property deeds in Monopoly) and the opportunity to collect payment from opponents who were forced to travel on the rail lines you own.  Although there is no property "improvement" in the obvious sense, there is still an opportunity to "monopolize" a region to guarantee payment when an opponent rolls a destination serviced only by railroads you own.

An aspect of the game that surprised me was the frequency with which it was necessary to look data up in tables - both to determine payment for destinations reached and to determine the next destination.  I say it surprises me today, but it wouldn't have surprised me in the 1970s, and that fact opened my eyes to a facet of game design that has clearly changed over the years.  Seldom do today's new titles require many table look-ups during the course of gameplay.  For the most part, game data are either easily memorized or readily available on cards or on the board.  It's hard for me to think of a game today - at least among those I typically play - that requires referral back to rules or tables the way that the strategy games of the 1970s did.

I remember Tobruk was notorious for requiring multiple dice rolls and table references with every weapon shot.  I think some people reveled in that degree of realistic detail at the time - the extent to which armor and ammunition characteristics were so carefully modeled in a tactical game like that.  Nowadays I wouldn't have that kind of patience, certainly not in a new game.  But then again, I'm not the wargamer I used to be.  I'm much more interested these days in games that are playable but still pose a mental challenge.

So, the question comes to mind:  If I were to redesign Rail Baron today, how would I go about it?  How would I preserve the general strategic sense of accumulating railroad companies to dominate regions of a transportation market without having to resort to detailed payment and destination tables?  How would I improve the playability and approachability of the game while maintaining the capitalistic appeal of railroad investment?

Before I pursue that question very far, I have to be honest about the fact that I am rather unfamiliar with the state of the art of rail games today.  Other than Ticket to Ride, I haven't played any of the recent rail game genre.  The 18xx series has quite a following, and I would probably do well to research those games first, to see whether they haven't already answered the "Rail Baron of the 21st century" question.
Posted by Paul Owen

Email ThisBlogThis!Share to TwitterShare to FacebookShare to Pinterest
Labels: 7 Wonders