The mystery of play balance

[I'm on vacation someplace where I don't have internet access, so today's is a re-post from September 2010 when I explored the topic of play balance in game design.]

I mentioned when recounting my game of Stonewall Jackson's Way with Paul R. that we started to wonder whether there was a bias in the game toward the Confederates.  Sure enough, we weren't the first people to think so.  A user on boardgamegeek directed me to Multi-man Publishing's Great Campaigns of the American Civil War "New Scenarios" page, which includes modifications to scenarios from the original Avalon Hill edition.  That page includes a link to proposed modifications to the victory conditions to the Cedar Mountain scenario that Paul and I played.  If those victory conditions had been in effect, I would have played much more aggressively on the third day of the battle, and perhaps much more realistically from the standpoint of how we might have expected Stonewall Jackson to behave in that historical situation. 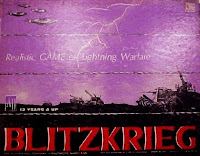 Play balance is always a tricky thing in games.  As a player, and as a buyer, it's important to invest time and money in a game in which everyone has a reasonable opportunity to win, inasmuch as the opportunity to win by virtue of one's own skill constitutes the essence of the fun of gameplaying.  Some games are transparently balanced by the nature of their design.  Chess and checkers are obvious examples.  The 1965 Avalon Hill game Blitzkrieg was specifically designed as an even match between hypothetical armies of fictional countries "Great Blue" and "Big Red."  That's fine, but it's also artificial.  Wargames that depict historical battles invariably put players in situations that may or may not be "fair" contests.  Incumbent on the designer, then, is to set victory conditions and other factors in such a way as to give each player a reasonable expectation of victory by superior play. 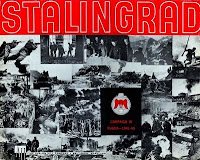 I read a fascinating article in The General that described the play balance of Stalingrad as being a function of the skill levels of the two players.  Between novices, a German player tended to defeat a Russian who had not learned the process of a fighting withdrawal river defense.  Between typically experienced players, a Soviet player tended to have the advantage by working the terrain of Russia to his advantage against the advancing German army, and the game carried a general reputation for being biased in favor of the Russian.  But at the very highest levels of experience, flawless German play could turn the propensity for victory back to the side of the Third Reich. 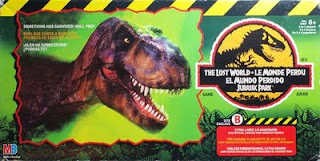 Conversely, a game that betrays an irrecoverable imbalance toward one side becomes dissatisfying and almost unplayable.  We have a Milton Bradley yard sale find called The Lost World: Jurassic Park that seems almost ridiculously biased toward the dinosaurs.  Okay, so it works as a parent-child game, with parent as humans and child as dinosaurs.  Otherwise, it becomes necessary to reduce the number of dinosaurs or the number of humans that need to escape (or both) to make the game interesting.  But at least the game is adjustable. 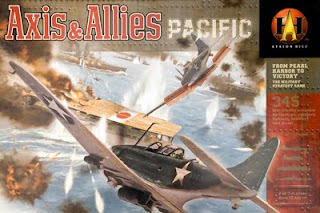 What is interesting about the General article on Stalingrad is the notion that play balance is sometimes in the eye of the beholder.  My gaming group currently believes that Axis and Allies: Pacific is irreparably imbalanced in favor of the Japanese.  My good friend Grant G. is brilliant at getting to the heart of a game, and in two or three plays, he seemed to have ripped the heart right out of A&A:P by developing what seems to be a near-guaranteed strategy as the Japanese player.  Our group pretty much stopped playing that game altogether as a result.  But in doing a little research for this post, I found that this perception is common among people new to the game.  On boardgamegeek, Moshe C. has posted a detailed review that makes a fascinating case for the balance of A&A:P, so much so that I'm curious to go back and re-examine the Allied position for a way to beat Grant and restore order to the historical universe.

So where does all this leave me as a game designer?  I think I'm even more sensitive to the importance of play-testing a game based on a historical setting that wasn't balanced to begin with, in the interest of making sure that no player can gain a guaranteed upper hand by following a certain path.  It becomes important to ensure that there is no "saddle point" in the game conditions that causes every play of game to resolve to the same end-state.