Hearing Women Tell It: A Review of "Girls on Games" 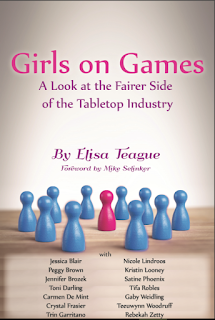 At a time when the board game community has become gradually aware of the unique experiences of women in the hobby, the gently feminist Girls on Games, an anthology on gender perspective in gaming particularly and in geekdom more generally, successfully Kickstarted in 2014 with over 900 backers.  Elisa Teague - designer of games, events, costumes, and props - compiled 15 essays by women and a foreword (by a man) and herself wrote six more plus an afterword.  She also interleaved “Share My Story Spotlight” anecdotes by two women, three men, and a girl, plus a poem – or perhaps a song lyric – by “The Doubleclicks.”  And to read and hear women tell it, despite a consistently optimistic tone throughout their essays, they experience some ugly behavior in our gaming hobby  – from condescension, to scorn, to challenges to their bona fides as game lovers.  After reading of these experiences, frankly, I don’t know how they put up with it.

I suppose not all women do put up with it.  We hear from the passionate gamer women who share their stories with an enduring hope to make future experiences better, more welcoming, more inclusive, more accepting, and less judgmental.  We don’t, on the other hand, hear much first-hand or in social media from the women who gave up after the first confrontation, who were intrigued by Catan among friends but were put off by their first unwelcome visit to a game store and so turned their backs on gaming as a hobby thereafter.  In this discourse, those voices are silent.

Is it an exaggeration to say that if the gaming community were aware of the women who have walked away, we would mourn them – or at least mourn the opportunity to share games with them and to grow the hobby that much further?  Every one of us brings something to the hobby.  Some of us design, some publish, some review and constructively criticize, some volunteer, some write, some podcast, but most of us simply play.  We all bring something to the table – except for those of us who don’t feel welcome at the table and stop coming altogether.  Those self-ostracized bring nothing, and we miss what they might have brought.

I should mention that this anthology’s fascinating perspective and insight suffer, regrettably, as a roughly hewn text in need of professional attention from both an editor and a formatter.  In the Kickstarter reward edition on my Kindle, the atrociously laid-out Table of Contents – with each page number appearing at the end of a ridiculous string of periods – did not get the same convenient, nicely hyperlinked treatment that the end notes did.  Headers and footers appear in the middle of pages of text.  I lost count of spelling and grammatical errors.  Page breaks do not separate chapters, which instead begin in the middle of a page.  A series of Dork Tower comic strips interleaved among the chapters appear too small on the screen to read and do not respond to magnification attempts.  Many paragraphs intended to lead with an over-sized capital letter instead appear as simply a word with its first letter separated from the rest of the word by two spaces.  These formatting and editorial issues make the book read like a first draft and distract from the collection’s otherwise compelling thesis.

And yet, for all of those distractions, a compelling thesis it has indeed.  As I read Kristin Looney’s “Life Without Boxes,” I found myself mindful of my own prejudices.  When I met Andrew Looney at UnPub 5 in Baltimore, I assumed that he ran Looney Labs – even though I’d seen Kristin Looney identified as Chief Executive Officer (CEO) on the company website.  I took her to be actually his business manager and attributed the quirky application of the “CEO” title to the offbeat, unconventional personality of Looney Labs.  Kristin Looney’s account of her gaming and business life, however, makes clear that it is Andrew that has a creative role in her company and not she that has a business role in his.  Looney Labs is successful in no small measure because Kristin Looney remained true to herself and brought her full knowledge and talent to bear, rather than accept the boxes into which people sought to put her as a woman in business.

Several of the essays recount frequent male accusations of some women as “fake geek girls,” a notion foreign to me.  I have no familiarity with this concept.  Perhaps I play among well-behaved gamers.  Perhaps it comes up more frequently in comic and video game conventions than at board game conventions.  Or perhaps I have something of a blind eye to the misbehavior around me, as one male admits in his “Share My Story Spotlight” to having heard but not noticed a woman being hit on at his own game table.

The women contributors consistently describe having to prove themselves qualified to participate in the gaming community, whether as creators, businesspeople, or even players.  In numerous random encounters, men dismissed women’s gaming experience or challenged their “geek credentials” by quizzing them as if their commitment to the hobby were on trial and men were the gatekeepers.  These challenges undermine – perhaps deliberately – women’s confidence and sense of acceptance in a community that ostensibly enjoys games with such like-minded fellow hobbyists.

Women feel targeted by these credibility challenges, but they may not realize that male gamers – particularly wargamers, in my opinion – cred-check each other continually in a kind of knowledge one-upmanship.  The most egregious example I can recall was at a War of 1812 re-enactment event, where one uniformed expert insisted that someone had pronounced “huzzah” incorrectly. The self-identified expert informed everyone in earshot of the correct 19th-century celebratory exclamation.  His elucidation of an obscure historical fact served a tacit but painfully obvious effort to establish a position in a geek knowledge pecking order.  Male geeks test each other in their command of obscura the same way that boys race to see who is fastest or arm-wrestle to prove superior strength.  Wargame geeks read avidly, remember voluminously, and expound proudly, sometimes obnoxiously and ostentatiously, for the sake of credibility and superiority among their peers.

Trin Garritano’s “The Greatest Game of ‘I’ve Never’” best illustrates the inherent one-upmanship among male hobbyists by turning the practice on its head.  She recounts an almost accidental conversation with a male stranger at a convention that turned into comparing notes on which canon video games they had not played – as if to say, “See, I’m an outsider just like you,” only to illuminate the point that no minimum gamer qualification checklist exists to enjoy the hobby and participate in the community.

Still, given the need for a sense of superiority in a climate of a geek hierarchy that challenges the male’s validity as a gamer, a woman represents a target of opportunity against which a male may compare himself and elevate his geek standing.  Teague personally undermined one such effort that she recounts in “The Cred-check: Set Up to Fail,” when a CVS clerk challenged her on the Firefly t-shirt she was wearing on the way to Gen Con.  She put the fellow in his place, and arguably, he asked for it, inasmuch as every such challenge carries a risk of failure and inferior standing against the opportunity to demonstrate superiority.  He thought he was picking on a weakling but instead woke up a tiger.  The cred-check backfired, and he had it coming.  Guys understand – or should understand – that issuing a challenge risks losing.  Women that beat men at this game should understand that they do not need to feel badly for them.

Except, that is, for the fact that the whole social construct of geek hierarchy undermines the hobby in the first place.  “The Desiderata” warns us against comparing ourselves to others, lest we become both vain and bitter, because there will always be those greater and lesser than we.  We male geeks risk vanity and bitterness in seeking validation through mutual comparison, but the male beast by nature seeks to challenge others to prove ourselves.  To fulfill our potential as intelligent, morally aware, enlightened beings, however, we need to transcend our primal tendency to push ourselves up by pushing others down and instead protect the dignity of every member of the community that would join us in our mutually enjoyable hobby, male and female alike.  Games, after all, constitute a fundamentally social activity.  We compete not to test ourselves against each other but to enjoy the company and the competition.  We embrace a social contract in the rules of the game and in entering the magic circle that envelopes our experience and structures our personal interactions.

This reviewer backed Teague’s Kickstarter project to fund publication of Girls on Games.  This review addresses the .mobi-formatted ebook reward copy from that crowd-funding campaign.
Posted by Paul Owen