PrezCon 2016: Pillars of the Earth final

I ran the tournament for Pillars of the Earth (designers Michael Rieneck and Stefan Stadler, artists Michael Menzel, Anke Pohl, and Thilo Rick; publisher Mayfair) at PrezCon again this year.  This worker placement game is based thematically on the Ken Follett novel of the same name.  Players compete to contribute the most to the construction of Kingsbridge Cathedral.  They have at their disposal a team of unskilled workers for collecting sand, wood, and stone, and for working in the wool mill for money.  Players can pay or recruit a team of up to five skilled craftsmen to use those raw materials to contribute to the cathedral's construction.  Metal is also available but more difficult to come by.

Each player has three "master builders" that serve the "worker placement" mechanic of the game to draft various actions on the board.  Privileges (based on characters and events in the book) provide special abilities or benefits.  Event cards can be globally beneficial or detrimental.  Points are earned at the end of each round, and after six rounds, most points wins.

In this year's PrezCon tournament, I had 18 different participants over two heats.  Seven people advanced to a semifinal round from which three emerged to participate in the final - Rick Kirchner, Robin Trew, and Brian Batovsky.

In the opening round, Rick (blue) took the Lady Aliena privilege, which yields an extra wood every round, as well as a special woodworker who yields gold rather than contributing to the cathedral.  The wood-gold strategy is a frequent favorite among tournament participants.  Robin (red) picked up the Richard privilege, which provides an extra sand, as well as a mason, who is particularly efficient with stone.  Brian hired the tool maker, who can earn two gold per round if properly equipped with metal.  The King celebrated a victory over his foes by giving five gold to each player.  At the end of the round, Rick and Robin tied for the early lead.

In the next round, Robin picked up a potter, who is especially efficient with sand, as well as Francis, a monk whose privilege minimized her taxes every round.  Brian added an architect and carpenter to his team, while Rick took a mason as well as Ellen, whom some people say is a witch but who gave Rick early insight into the special event card at the beginning of each round.  A cold winter resulted in a famine that made the workers less productive in collecting raw materials as Rick opened up a small lead over Robin, with Brian not far behind. 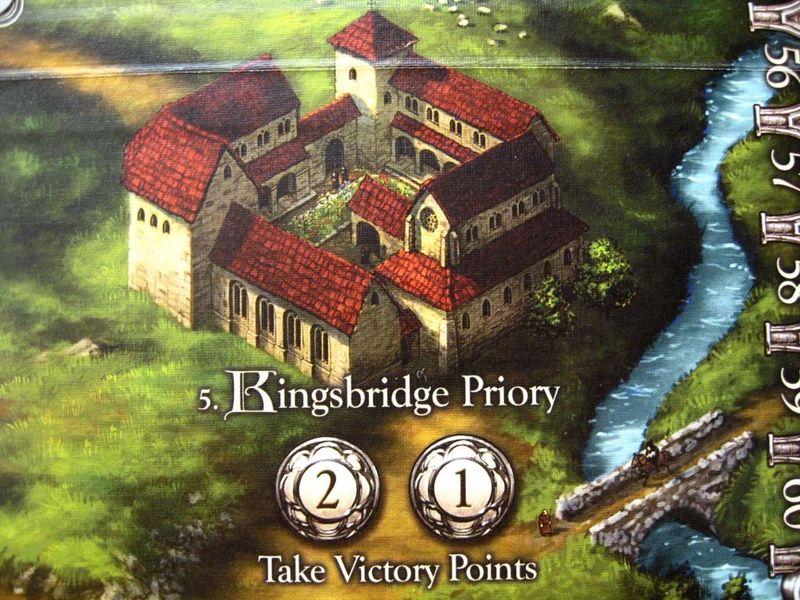 The third round saw Brian gain the favor of Prior Philip, who yields extra victory points whenever his master builder visits Kingsbridge Priory.  Rick picked up a potter, and Robin a carpenter and sculptor, the latter twice as efficient as a mason in his use of stone.  Robin also benefited from the study of mathematics by picking up two metal.  A conflict between Prior Philip and Bishop Waleran cost two points for any player who had not sent a master builder to the Archbishop's Office.  Robin had narrowed the gap with Rick, who still maintained a slim lead.

In the fourth round, Rick brought the Crying Madonna to visit the cathedral site, which earned him a bonus of three points.  Robin recruited the first glassblower of the game, and gained the privilege of Archbishop Thomas's protective hand.  Brian meanwhile gained another carpenter as well as a sculptor.  The Archbishop gave a new Madonna to the cathedral, which inspired one craftsman on each team to be more productive.  In a sudden reversal, Brian pulled ahead with a 13-point turn to take the lead, with Robin in a close second and Rick, the leader for the first half of the game, right behind.

In the fifth round, Robin did not upgrade her position but used what she had to gain another 12 points.  Brian demonstrated loyalty to the king, which would earn him a tax exemption in the next (final) round.  Rick brought in three new craftsmen - a sculptor, a goldsmith (who converts money to victory points), and a glassblower - as well as Tom Builder, who yields an extra stone every round (a rather late stage in the game to bring in that privilege).  Because the town needed a new wall, players without a master builder in the Archbishop's Office would be short one master builder in the final round.  Robin's 12-point turn had gained her the lead over Rick in second place and Brian in third.

In the last round, Brian brought in the organ builder and Robin the bellmaker.  The roof of the cathedral collapsed, killing Rick's potter and Brian's woodworker.  Rick benefited from the visit of the king with a delivery of metal for his glassblower, while Robin acquired extra stone and wood as the cathedral was nearly finished.  In the end, Rick had a 16-point last turn to pull ahead and win the game with a total of 48 points.  Brian actually had a bigger final turn with 18 points but was too far behind to catch up.  He and Robin tied at 46 points; Brian won the tie-breaker by one gold.

I always enjoy watching this level of play at PrezCon.  Rick, Robin, and Brian are all very skilled, and it showed in the fact that the gap between first and third position was never more than six points throughout the game - and usually much less than that.
Posted by Paul Owen

Email ThisBlogThis!Share to TwitterShare to FacebookShare to Pinterest
Labels: Pillars of the Earth, PrezCon