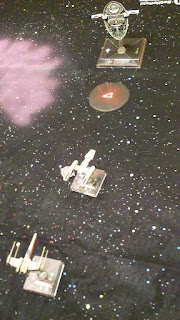 My wife is at a writers' conference in North Carolina this weekend, which means it's just us guys in my house - my 19- and 14-year-old sons and me.  I'm thinking Friday night is Star Wars X-wing, with the 19-year-old as Boba Fett in the Slave I against the 14-year-old and me flying X-wing and Z-95s against him.  Two against one, but we're not afraid.  [Update:  We did indeed play X-wing, although I flew a Y-wing rather than Z-95s.  There was no escape for Boba Fett this time, as a proton torpedo from my pursuing Y-wing delivered the fatal blow, even as he deployed a mine in my path.]

Tomorrow my friend Grant is hosting a big Axis and Allies: 1940 event.  My sons aren't likely to have that kind of attention span to participate, and I can't really abandon them for ten straight hours (well, maybe I could, but I'd pay for it later), so I'll probably just swing by and see the progress of the game at some point that afternoon.  I'll have to content myself with watching the Navy - Notre Dame football game (and maybe coax my sons into some Heroscape or other gaming action).  Maybe a war movie that evening, or Lord of the Rings - something my wife would never sit and watch with us.

Sunday afternoon, my wife returns, and we have a family game on the docket as soon as she gets home.  Pretty tame as bachelor weekends go, but it suits me just fine.  It's all about family.
Posted by Paul Owen