[Apparently I'd written this entry last February after UnPub 5 but never posted it.  Then this evening I accidentally published it.  For better or for worse, here it is.]

After two playtest sessions of "East India Company," it was time for me to make the rounds at UnPub 5.  The great thing about a convention like UnPub is the people you meet.  I spent a good part of the weekend chatting with Bruce and Mike of The Party Gamecast and playing a few games with them, including Red 7 and Marcus Ross's Discount Salmon (which was fun though not my style of card game).  I had the opportunity to talk with Chris Kirkman of Dice Hate Me Games, Andy Looney of Looney Labs, Luke Peterschmidt of Fun to 11 Games, Mike Lee of Panda Game Manufacturing, and Diamonds designer Mike Fitzgerald.  That is what a convention experience is all about.  But I also played some games:

I stopped by the table of Dr. Wictz (alias Aaron Honsowetz and Austin Smokowicz) and was delighted to see that they have a new game to playtest called "Hoboken."  UnPub 5 was crazy-busy on Saturday afternoon with players wandering around trying to find empty seats, and in no time I was able to lure three other players - Krys, Richard, and Chris - to join us for a playtest session.  I am already a huge fan of the Dr. Wictz racing / stock market game "Post Position," and I was not disappointed by this new market-driven negotiation investment game.  "Hoboken" has a hotel strip - or rather, an avenue ready for hotels to be built in anticipation of tourist traffic.  Players start with building permits and cash, but no single player has enough money to build a hotel alone.  So players must sell shares to other players to raise enough cash to build a hotel.  And that's where the negotiation comes in. Hotels vary in cost to build as well as insurance compensation when the inevitable hurricane arrives to end the game.

Once the first round of hotels are built, potential guests make their way down the strip seeking a place to stay, and in a push-your-luck tile-drawing mechanic, players can turn away the lower-paying clientele in anticipation of more lucrative customers - at the risk of bedbug infestation wiping out income for the season.  As players accumulate capital, they can collaborate in the construction of more hotels, until enough hurricane tiles come out of the bag to signal the end of the game, payout of insurance, and declaration of a winner based on my favorite victory condition, most cash.  I won our game with $92, and it took less than an hour to play.

Dr. Wictz has done it again with another negotiation risk-management investment game - perhaps even more elegant in its execution than "Post Position."  I found "Hoboken" to have some of my favorite design elements - share valuation, risk assessment, and especially shared capital investment.  As in my favorite game Chicago Express, "Hoboken" requires players to collaborate to capitalize businesses and share income while still competing to out-perform each other in return-on-investment (ROI).  I look forward to seeing "Hoboken" come to market, because it is a sure-thing investment for me. 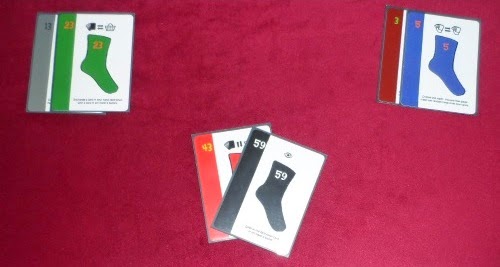 Odd Socks
John du Bois is among my game design twitter contacts, and it was great to meet him in person.  He has a nice little card game in work called "Odd Socks" in which players are dealt a hand of cards from a deck of pairs of socks from which one sock has been removed - a little like "Old Maid," except that the goal of the game is to end up with the odd sock.  But "Odd Socks" is so much more, because the different types of socks have different actions that allow players to trade, steal, conceal, or reveal socks in their own or other players' laundry piles.  A player can play a sock card face down in her own laundry basket or face up to execute its action.  The conundrum of every turn is whether to gain the advantage of the card's action or to conceal its identity from opponents.  I played this game twice with fellow playtesters Jon and Ana Maria.  I found it to be a nice lightweight filler game with clever decision twists on every turn.  A print-and-play version is available at UnPub.net.

Dark Dealings
Mike Kelley and Peter Gousis of MVP Games brought a number of games to UnPub 5, including a fun little card drafting game called "Dark Dealings."  The premise is that players are evil wizards whom the townspeople oppose with heroes great and small.  Players draft cards with which to purchase spells and weapons in three categories to combat those heroes, but the clever twist is that the cards used to purchase the weapons become the heroes that those weapons must defeat - so that drafting the highest-value cards means fighting the toughest heroes.  The weapons purchase phase uses the same mechanic as the house-purchase phase of For Sale, which works very well in this game.  The combat phase has players try to outlast each other as the heroes they drafted come after them one at a time and their weapons wear out and gradually disappear.

I got to play this game with designer Mike Kelley and fellow playtesters Doug Porterfield and Keith Ferguson.  I really loved playing "Dark Dealings" - not too complicated, but not too light - with a kind of knife-edge close finish, when the weapons are running out just a little faster than the heroes.  I thought I'd heard at the end of UnPub 5 that a publisher had expressed interest in it.  I hope that's true; I'd like to see this one go to print.  Mike and Peter each mentioned that the game was being changed over the course of the weekend, but it felt pretty solid in my one playing.

Baseball Highlights 2045
Once UnPub 5 prototype playtesting events were done for the day at 8:00 p.m., open gaming started, and designers and publishers hung around to play published games and compare notes.  I was thrilled to get the opportunity to play Baseball Highlights 2045 with publisher Ralph Anderson of Eagle-Gryphon Games, along with my friends Keith Ferguson and Carson Lee.  I've never played a baseball game quite like this one.  The game doesn't quite play out like nine innings so much as it builds a box score, where an individual player might get three singles, or pick off a runner in scoring position, or - as happened in one thrilling moment - hit a walk-off grand slam to come from behind and win the game by a run.  A single "ballgame" plays pretty quickly, as players run through a hand of about six player-cards, alternating one at a time in an effort to counter each other's offense while trying to mount scoring opportunities.  So a "game" might consist of a three-game series, or a best-of-seven series, or even more.  Four players can play a kind of round-robin season of series in an hour or two.

I was really impressed by this game, which I had previuosly dismissed as a silly science-fiction adulteration of baseball.  Now that I have played it, I have added it to my baseball wishlist, alongside Darrell Louder's "Bottom of the Ninth" and Max Jamelli's "Lords of Baseball."

After Hours
After the convention center closed, a number of us convened in a meeting room at the Holiday Inn - thanks to Mike Mullins - for late-night gaming.  Kiva Fecteau, Marcel Perro, Keith Ferguson, Tam, and I played a round of Belle of the Ball - which I had Daniel Solis sign.  This was my first five-player session of BotB, and it was a lot of fun, although I will admit that like Alhambra, it is very hard to plan ahead when four other players are changing the available options before your next turn comes around again.  So it becomes a very tactical game, and still a lot of fun.  The best part was that I played "The Belle forbids politics" on Marcel, and he kept blaming Keith for it.

We also played Tiny Epic Kingdoms, which is a fun little civilization-building game.  I didn't quite get into it, I think in part because the game had been so hyped up for me that perhaps I had unrealistic expectations for it.  Still, it was fun for what it is, and while I won't buy it for myself any time soon, I'd be happy to try it again and see if my impression improves.
Posted by Paul Owen