Saturday Jarrett Melville organized an UnPub Mini event at The Game Vault in Fredericksburg, Virginia.  This event was a nice informal gathering of game designers and playtesters at a friendly local game store that turned into a solid success.

The Game Vault is a spacious gaming location with a clear emphasis on Warhammer 40K, Magic: The Gathering, and Flames of War.  They carry a respectable board game selection and have plenty of tables suitable for the genre, so the site was well-suited to our playtesting with no mutual interference with the miniatures gamers that filtered into the store over the course of the day.

East India Company
Keith Ferguson and I arrived first, and we were presently joined by Jarrett as well as the Dr. Wictz design team of Austin Smokowicz and Aaron Honsowetz.  A fellow named Anthony who was waiting for a WH40K partner agreed to join us as well, and we launched into our first game of the day, "East India Company."  This was my first playtest with a new set of action cards that I'd added for historical flavor and player interaction.  The cards find their inspiration in John Keay's The Honourable Company, the history of the East India Company that I'm reading. 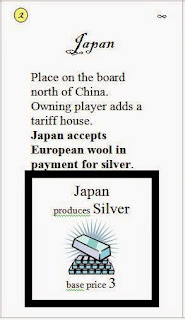 It seemed that the temptation to buy and play action cards was strong, as several players bought a card almost every turn.  My intent is that the decision to purchase a card isn't automatic but is something of a calculated opportunity for an advantage that may or may not pan out.  As a result of card play, France (Aaron) opened the Japanese silver market and the Dutch (Anthony) opened the Levant overland trade route, while interlopers absconded with significant profits from the English (Jarrett) and Spanish (Keith) trade in India.  The Spanish also armed their ships, which protected them from pirates (though too late for an early loss of silver to Barbary pirates in West Africa).  In the end, the Spanish won, but without showing a profit.  All other players ended up losing money over the course of the game, a consequence possibly of over-investing in action cards (of which the Spanish bought only two).  Interestingly, France adopted a deliberate bankruptcy strategy, which proved viable since French captains  could sell goods oversees to the Levant traders without showing their deadbeat faces in European ports.  All the same, France finished fourth out of five, suggesting that if borrowing-and-fleeing is a legitimate strategy, it still needs work.

All in all, I was very pleased with the playtest of the new cards.  I have some refining to do, but I'm mostly gratified that the cards didn't break or prolong the game.  Also, I keep getting the comment that the game ends too quickly, but I'm reluctant to prolong the game after all my effort to contain the duration.  So I'll take that comment under advisement.  The bottom line is that I was very happy with the playtest session and got some good notes.

Santa's Workshop
Anthony moved on to his WH40K game, and we were joined by Greg, who had been to UnPub 5 and was interested in trying out some games that he had missed in Baltimore.  So we sat down for a round of Keith Ferguson's "Santa's Workshop," a holiday-themed worker-placement game that I think is very tight.  Players run teams of elves in Santa's workshop and seek to outdo each other for Santa's approval by fulfilling the most Christmas wish letters and feeding the reindeer.  During the drive down, Keith expressed concern about a runaway winner problem that came out in a recent playtest relating to the use of plastic as a substitute material in toy manufacture.  He made some adjustments, and I decided I'd test whether the "plastic strategy" was still degenerate.

Keith had made some other changes since my last play of the game.  The direct conversion of coal to victory points (putting coal in stockings of naughty children) had been over-powered in the previous version; Keith had simplified and toned down the mechanic in a way that turned out to be very understated in this session.  My plastic strategy worked at first, and I jumped to an early lead at Santa's first inspection with nine bonus points for having the most gifts completed.  Over the game, nearly all my toys were constructed entirely with plastic, and I never needed additional coal to purchase higher-quality materials.  The strategy is limited, however, by the number of plastic pieces that a worker can take in a round, and that limitation properly throttled the effectiveness of a single-minded strategy.  I ended up finishing third, suggesting that plastic is a viable scoring method but not sufficient all by itself for a winning game.  Greg won with a focus on many smaller toys and a big bonus at Santa's final inspection.

As a game, I think "SW" is ready to go to a publisher.  Keith acknowledges, however, that his theme is his biggest obstacle to publisher acceptance.  Gamers who would appreciate the worker-placement depth would overlook it for the theme, whereas families expecting a light, kid-friendly family game featuring Santa's elves would be overwhelmed and disappointed by something too complex.  He needs to reconcile the game he wants to make with the theme that inspired it and come to terms with what will be necessary to make the game a reality.  I really hope he does; I've enjoyed it every time I've played it, and this is a game that should be published.

Tooth Fairy Frenzy
Jarrett almost didn't bring out his game, but we managed to coax him into showing us "Tooth Fairy Frenzy," a light but tactically interesting game in which players are fairies competing to get the most teeth from a five-by-five array of sleeping children.  Fairies start with fairy dust, some of which they must convert to coins to leave under children's pillows for each tooth.  The decision of how much dust to convert to coins before entering the mortal realm is the heart of the decision-making in this game.  Fairies enter the array of children's bedrooms and must spend fairy dust to move from room to room to avoid waking the children while replacing teeth with coins.  Obstacles include light sleepers (who may wake easily), heavy sleepers (who wrap themselves around their pillows and make it difficult to get to the teeth), cats (self-explanatory), and books of fairy tales (which fairies can not resist stopping to read).  When fairies don't have sufficient fairy dust to move or coins to leave for teeth, they must jump *poof* from the mortal realm back to fairy land, where they can obtain more fairy dust and prepare for their next tooth-hunting venture. Once all the teeth have been taken, the fairy with the most teeth wins.  Excess fairy dust is the tie-breaker.

I was pleasantly surprised at the tactical nuances of this game.  Teeth with crowns are worth double and so are the focus of most fairies as they accumulate fairy dust and venture further into the mortal realm.  Fairies must plan their moves to the extent that they can with the risk that other fairies may undermine their plans by getting there first.  There is also an interesting mechanic by which fairies can slow one another down by moving nearby and forcing them to spend more fairy dust to leave children's bedrooms.  In our game I obtained a sleeping mask, which made it easier for me to traverse the bedrooms of light sleepers without waking them.  I ended up tied for first with Aaron, who won the tie-breaker because he had a huge stockpile of fairy dust at the end of the game.

Jarrett has a surprisingly good game here, and I would love to see it get to print.  We all agreed that it is a nice, accessible, short game with an appealing theme that any number of small publishers should be happy to consider.

Hoboken
I played Dr. Wictz's "Hoboken" once before, at UnPub 5, and really liked it.  This mutual investment game requires players to cooperate in pooling resources by buying and selling shares in hotels for which they hold building permits.  Rather like Chicago Express, players end up with portfolios of shares of companies that pay dividends, and the most successful investor is the one who most cost-effectively generates income.  An interesting twist to "Hoboken" is that income arrives in the form of blocks of hotel guests - low-paying vacation families, mid-paying business travelers, and high-paying rock stars and corporate executives.  Potential customers start at one end of the strip and stop at the first hotel that will accept them.  There is a push-your-luck element in which the majority shareholder of each hotel decides to accept the guests or pass them along to the next hotel in anticipation of a better-paying client.  The risk is that bedbugs may infest a vacant hotel before a paying client is accepted, meaning that the hotel receives no income for that round.  Meanwhile, a hurricane approaches the New Jersey shore, threatening to end the game but promising an insurance payment to shareholders at the end.

I love games that involve valuation and speculation, and "Hoboken" fires on all those cylinders.  The negotiation phase is a lot of fun, almost a stock-trading floor vibe of people trying to buy and sell shares in each other's hotels before the timer runs out.  Early on, Keith somehow managed to have a portfolio strictly larger than mine (meaning that he matched me share for share, plus had an extra at one hotel), which meant that his income would always be larger than mine until I changed the situation.  I tried to paint Keith as the guy that the other three of us had to beat ... until we all noticed at mid-game that Greg was majority shareholder at almost half the hotels on the strip.  Toward the end, shares were trading pretty heavily, but when the dust cleared, I won by a very narrow margin.

"Hoboken" is probably much more marketable than the other Dr. Wictz design, "Post Position," on which I've written so much.  "Hoboken" might still need some tweaking, and they are collecting metrics on their playtest sessions to evaluate what adjustments to make.  I sensed that the counter mix among bed bugs, families, business travelers, and rock stars made for very little decision-making as to accepting or passing guests.  All in all, I think they'll have a publishable game within the year if they can identify the right tweaks that the game needs.

Summary
Keith and I agreed that we had a really solid playtest afternoon, and we were grateful to Jarrett for putting the event together.  I expect that after the summer conventions, we'll look at another opportunity to get an UnPub mini event set up.
Posted by Paul Owen