HistoriCon 2013 Saturday - USMC in the ACW

Last Saturday at HistoriCon, my friend Frank Hodge and I spent the morning in seminars and then joined our friend Grant Greffey for his latest WarZone scenario in his Dr. Orenstein series.  What follows are a few notes that I took from the first seminar, with others to follow in subsequent posts.  Any errors in this account with respect to the history of the Marine Corps and surrounding events are my own.

A few highlights from Mr. Westermeyer's lecture include an unfair reputation that the Marines acquired at the First Battle of Bull Run for "turning their backs to the enemy."  He observes that most of the Marines present were recent recruits who had been in uniform less than three weeks.  He opined that there were perhaps 15 veterans in an entire battalion.  Even so, the Marines retreated, rallied, and attempted several stands before ultimately fleeing the battlefield with the rest of the soldiers.

Mr. Westermeyer's overall thesis seemed to be the crisis of mission that the Marine Corps was undergoing during and after the Civil War.  The Army had embraced amphibious warfare, whereas most Marines were serving aboard naval ships.  There were a few early operations in which Marines were organized into battalions with mixed success, including an assault on Port Royal and a raid on Fort Sumter, which led to a general sentiment at the time that large-scale Marine operations were ineffective. 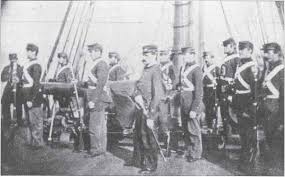 which they earned a strong reputation among the naval officers.  Marines earned 17 Medals of Honor in the Civil War, of which 13 were Marine Guard gun crew members.  Officers found shipboard gunnery to be their avenue of success for the Marine Corps.

Mr. Westermeyer discussed in some detail the assaults on Fort Fisher, which protected blockade runners en route to Wilmington, North Carolina, a major commerce center for the Confederacy.  A battalion of Marines was attached to a Naval Brigade of sailors that participated in assault, in which they suffered heavy casualties.  The Army eventually took Fort Fisher, and Rear Admiral David Dixon Porter would blame the Marines for the Naval Brigade's failure, although a number of individual Marines were recognized for valor.  Their participation in the assault on Fort Fisher, Mr. Westermeyer contended, would be the genesis of the mission of the Marine Corps to seize and hold advanced naval bases.

After the war, the Corps would survive attempts by Senator James W. Grimes and Assistant Secretary of the Navy Fox to disband the Marines.  Marines would see post-war action in seizure of Korean naval bases, the Boxer Rebellion, and Philippine insurrection.  Mr. Westermeyer went on to suggest that Lejeune would further define the mission of the Marines and eventually mold the reputation of the Corps as an elite fighting force that would prove itself on Tarawa, Saipan, and Iwo Jima.
Posted by Paul Owen

Email ThisBlogThis!Share to TwitterShare to FacebookShare to Pinterest
Labels: HistoriCon