My recent posts on game theory have focused on games with discrete strategies, which is to say that players are faced with a finite number of choices for each decision. Some time ago, in our colloquium on games of strategy, Aaron Honsowetz, Austin Smokowicz, and I discussed games with continuous strategies (also on video) - those games in which players choose a value on a spectrum, such as a price to set on a commodity.

Simultaneous games with discrete strategies lend themselves to tabular analysis, which is to say that a decision in the game can be represented by a cross-matrix between one player's decision options and the other's. In a game of continuous strategies, the number of options becomes too large to express as a table in a practical way, so instead such games can be expressed graphically or even algebraically.


The example with which Dixit Skeath and Reilly illustrate this concept is a town with two restaurateurs (Xavier and Yvonne), each of whose quantity of customers depends both on their own menu price and on the other's. Xavier attracts more customers the lower his price (PX) is and the higher Yvonne's price (PY) is. Let's suppose market analysts have established the following linear relationship that describes the expected quantity of customers for Xavier (QX):

Likewise Yvonne can expect a certain number of customers QY based on the same two prices:

But customer volume alone does not determine success; it is important to be profitable. Each customer represents a marginal profit equal to the difference between the price charged and the cost of providing the meal. Total profit is the product of that per-customer marginal profit times the number of customers. So Xavier's total profit RX is represented by

For any given competitor price PY , Xavier wants to select a price PX that maximizes his profit RX. So we’ll re-write the equation for RX in a way that we can optimize for PX as an independent variable.

Now for a fixed PY we’ve written RX as a quadratic in PX. We can set its derivative to zero to find the price PX at which profit RX is a maximum:

This linear equation for PX as a function of PY is called a best response curve. It represents Xavier’s best response to any price that his competitor Yvonne might set. 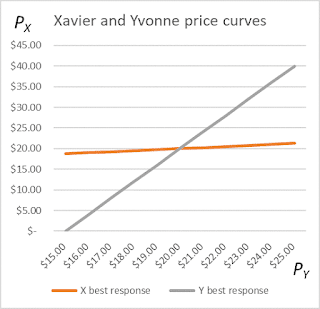 Yvonne can likewise calculate her best response curve, and by virtue of the symmetric nature of this particular situation, we find that it is represented by a similar equation:

Why should we believe that this point represents the Nash equilibrium? We can evaluate what happens if one restaurateur unilaterally changes their price. Say for example that Xavier attempts to attract more customers by dropping his price to $19. He now attracts 44 – 2*19 + 20 = 26 customers but reduces his profit margin to $11 for a total profit of $281, which is seven dollars less than if he’d stayed at $20. Similarly, if he increases his price to $21 to raise his profit margin to $13, he only attracts 22 customers, for a total profit of $286 – again, less than if he’d stayed at $20. Yvonne faces the same math and likewise maximizes profit by adhering to the $20 price. Thus, that price point represents a Nash equilibrium.

Note that if Xavier and Yvonne could trust one another to fix the price at a higher point, say $25, then they both would make a greater profit: $17 per customer and 19 customers for a total of $323. But then each would be motivated to secretly undercut the other to attract more business and increase their own total profit. This situation represents a “continuous strategy” version of a prisoner’s dilemma in which both could do better if they cooperated, but the possibility of betrayal yields an equilibrium with lower pay-off for both.

So we can extend game theory analysis to games with continuous strategies, i.e. a range of options that does not lend itself to tabular explication. And my post two weeks ago on mixed strategies extends to such continuous strategy games if they introduce best response curves that don’t yield a pure Nash equilibrium.
Posted by Paul Owen