I had demonstrated "East India Company" to a publisher at PrezCon last February, and came away realizing that the action cards I had added since UnPub 5 last year still needed some balancing.  I was also dissatisfied by the amount of down-time I observed (although the players hadn't complained about it).  In anticipation of UnPub 6, I made three significant changes:

These were the changes that I brought to UnPub 6 last weekend for testing.  I was a little concerned that I had made so many simultaneous changes, so that it might be difficult to diagnose which had caused any unintended consequences.  I decided to proceed assuming that the changes are "orthogonal" to one another, i.e. that they affect different aspects of the game and are unlikely to overlap in their effects. 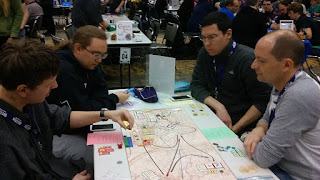 I ended up with three playtest sessions at UnPub 6 - two five-player and one four-player.  One playtest ended up in an unlikely but devastating scenario - neither of the two most valuable commodities came available for the entire game.  The result was a "bear market," one in which the players found it very difficult to make a profit.  At times players were inclined not to send ships to sea because they would only lose money; that's exactly the kind of situation I want never to have happen.  So starting with the very next playtest, I modified the initial set-up procedure to guarantee that China would produce tea at some time during the game.

The action card modifications seemed to be spot-on.  Nothing seemed over-powered, although in some cases players ended the game with a number of unplayed cards.  Those leftover cards might indicate that the players considered the cards under-powered relative to their cost to put in play.  In hindsight, I should have specifically asked that question at the end of the game.

The turn-order change seemed to work very well.  Players intuitively grasped what they could do with a ship on a turn.  I was concerned that placing a "voyage marker" on a ship after it was done would be a cumbersome mechanic, but it worked very well and definitely eliminated any confusion as to which ships had moved and which hadn't.

I was most concerned with the changes in the available ships for construction.  As it happened, they worked very well.  Players were more inclined to build the smaller, fastest ship than the largest, slower ship, so I might re-visit the pricing, but not by much.  The result established a much broader decision space in which the players could work.  I didn't realize how much the previous ships skewed and narrowed the available options until this UnPub. 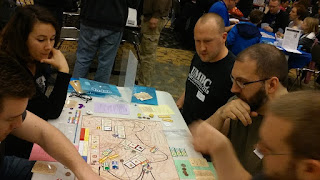 Verbal feedback from the players indicated that several were dissatisfied with the way the start player token is managed.  They didn't like the fact that the person who wins the auction keeps the token and continues to go first until someone else takes it in a subsequent auction.  This rule is relatively old and well-established from previous playtests, but this UnPub was the first time I'd had that comment.

Game length concerned me most from these sessions.  I ran a stopwatch against the four-player game (the first time that I've remembered to do that), and the game ran 133 minutes, which is about 40 minutes longer than I want.  The other two games also seemed to run on the order of two hours.  My old problem of duration has crept in again, despite the "voyage phase" turn order change.  Based on previous feedback not to reduce the number of turns, I still have work to do to streamline the individual turn execution.

After the event, I reviewed feedback on the UnPub site.  Of 14 players, seven submitted feedback forms.  The numbers were not good in general, and there were some pretty honest, forthright criticisms as well as some recommended changes. One wanted to be able to sail around the world (a suggestion I've seen before but don't like) and one wanted money to be hidden (which I also don't like but will consider if it becomes a factor).   I'd like to think that everyone enjoyed the game, but that turned out not to be entirely the case.  Still, the whole point of playtesting is to identify what doesn't work.  That's what makes UnPub such a unique opportunity.

I've settled on two changes going forward, in addition to the set-up change that I adopted during UnPub (guaranteeing that "China produces tea" is in the tile bag):
So "East India Company" remains a work-in-progress, and UnPub 6 provided an opportunity to continue to improve it.
Posted by Paul Owen