I think there were others as well.  He was kind enough to give me a print-and-play copy of his two-player micro-game "Holmes and Moriarity," a martial arts card game that he demonstrated to me at UnPub 4 as "Skirmish 16."  I look forward to trying this one out with Kathy.

Wooden Ships & Iron Men Fleet Action
One of the highlights of WBC for me is the WS&IM fleet action.  It's an opportunity to gain tournament points toward the semifinal qualification, but really it's just a six-hour sail-fest orgy of 18th-century naval combat.  This year, Tim Hitchings had composed a scenario that was really a hybrid of two historical events.  A large but mediocre-quality French fleet encountered a smaller crack British fleet which would eventually receive reinforcements.  I led a squadron of two 74-gun Class 2 French ships-of-the-line with average crews.  Our goal was to do as much damage to the starting British fleet as possible before reinforcements arrived.

My seamanship was true to my French character, as I managed to cause multiple collisions that should have been entirely avoidable.  I even broke the bowsprit from one ship and spent the better part of the game repairing it.  Worse, the ship could no longer rig full sails for greater speed, which really slowed down my progress trying to engage the British fleet.

The French fleet started in a line abreast on a beam reach, directly upwind of and bearing down upon the British.  Unfortunately, due to our poor seamanship, our admiral was not confident that we would be able to switch from full sails to battle sails in a timely manner, so he had the French fleet approach the British in battle sails even though we were outside extreme gun range.  The British turned tail, managed to form themselves into a battle line on a broad reach in full sail to open the range, then settled in and anchored in the shallow water in wait for our approach.  The French fleet engaged in a most disorganized fashion, and we never formed any kind of respectable battle line for the entire action.

The wind veered 120 degrees, which suddenly made our approach to the British much more problematic.  Just when the right end of the French fleet started to engage the closer end of the British line, a host of British reinforcements arrived to our left.  They arrived in perfect battle line on a beam reach and threatened to slice the approaching French fleet in two.  My position was especially poor at this point.  I was inadvertently blocked from engaging the original British line to the right by my fellow French captains, and I was directly downwind from the British reinforcements on the left and so forced to tack very slowly upwind to try to get into action.

In the end, my two SOLs never saw action, even after several hours.  Our tentative approach and failure to organize a solid battle line left much of the French fleet ineffective.  I had to leave before the end of the battle, but I was rather disappointed by the anti-climactic nature of how the action played out.

Acquire semifinal
The reason for my premature departure from the WS&IM fleet action was to see whether I had qualified for the semifinal for Acquire (designer Sid Sackson, artist Kurt Miller, publisher Wizards of the Coast).  Although I was an alternate, there were enough no-shows that I got to participate in the semifinal round.  My opponents were Mindy, Joel, and Alex, and I enjoyed another intense round of one of my very favorite games.  Mindy did very well with early mergers, and that played out well for her when the rest of us ran out of money and left her with one or two turns of buying more shares than we did.  In the end she won with a comfortable total of about $46,000.  I had a respectable if distant second-place finish at $33,000, with Joel right behind me at $30,000 and Alex at about $20,000.

Demos
One of the many things I enjoy about WBC is attending demos and learning about games I might not otherwise see.  This year I was treated to a real spectacle:  A complete set-up and demonstration of Memoir '44: D-Day Mega Overlord (Days of Wonder) was in full swing, with designer Richard Borg presiding.  There must have been 10 or 12 players around the table commanding different sections of the Normandy invasion.  The whole thing was very impressive, although I was reluctant to let myself get swept into the action.

James Kramer demonstrated the old Avalon Hill card game Naval War (designers S. Craig Taylor and Neil Zimmerer), which was clearly a low-budget production but which has something of a following.  I found it to be a mediocre game in several respects.  It features player elimination but does not have a quick play time.  James indicated that reaching 75 points to win can take several hours.  The font on the cards for ammunition caliber and other game-essential details was really unnecessarily small.  In terms of gameplay, I was reminded of Enemy in Sight, which I bought from Lost Battalion Games at HistoriCon many years ago (when I had the opportunity to meet S. Craig Taylor, designer of WS&IM).  I've come to the general conclusion that there is no such thing as a good naval card game, with the possible exception of Pacific Typhoon (and even that one runs a little longer than it needs to).

Some time ago I remember Chris Kirkman speaking very highly of Yspahan (designer Sebastien Pauchon, publisher Rio Grande), which I subsequently picked up at an auction.  I haven't broken it open yet, however, because the box cover bills it as a game for three or four players, even though boardgamegeek says it's for two to four.  So at WBC, I made a point of seeing the Yspahan demo by Chris Yaure.  I am not disappointed; indeed, I think this game looks like a really fun little Euro.  At the end of the demo, I asked Chris about its suitability for two players, and he described just a couple of rules changes that are unique to the two-player case.  In fact, he was surprised to realize that the two-player variant is not in the original rules, but he referred me to boardgamegeek to find it.  I will be looking it up soon. 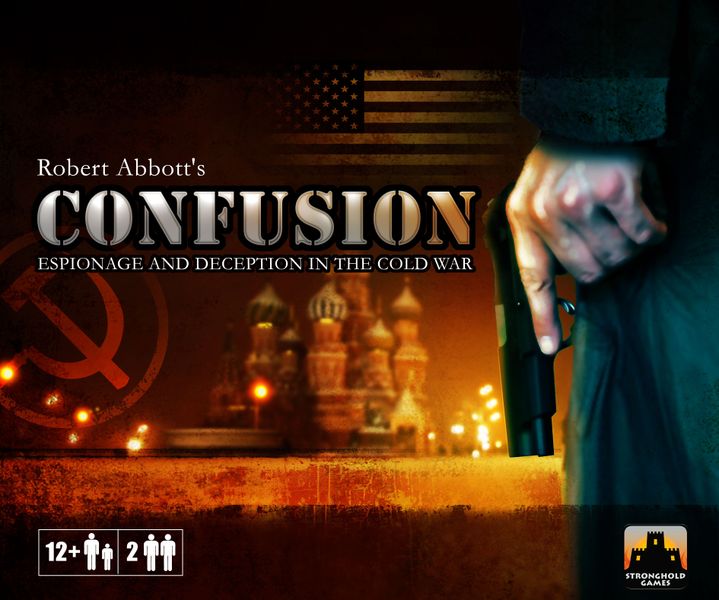 Keith and I met up in open gaming, and while we waited for Brian Greer to finish his Tigris and Euphrates semifinal, we got in a couple of games of Confusion: Espionage and Deception in the Cold War.  We'd played it before, and I really like it even more now.  This game is almost a cross between backwards Stratego and Mr. Jack.  I had stayed away from buying it because Kathy doesn't generally like two-player abstracts, but more and more I'm convinced that the deduction element and the opportunity to get inside the other player's head would appeal to her, and I think we would enjoy this game.  Keith offered to have me borrow it so that she and I could try it out and see if she likes it. 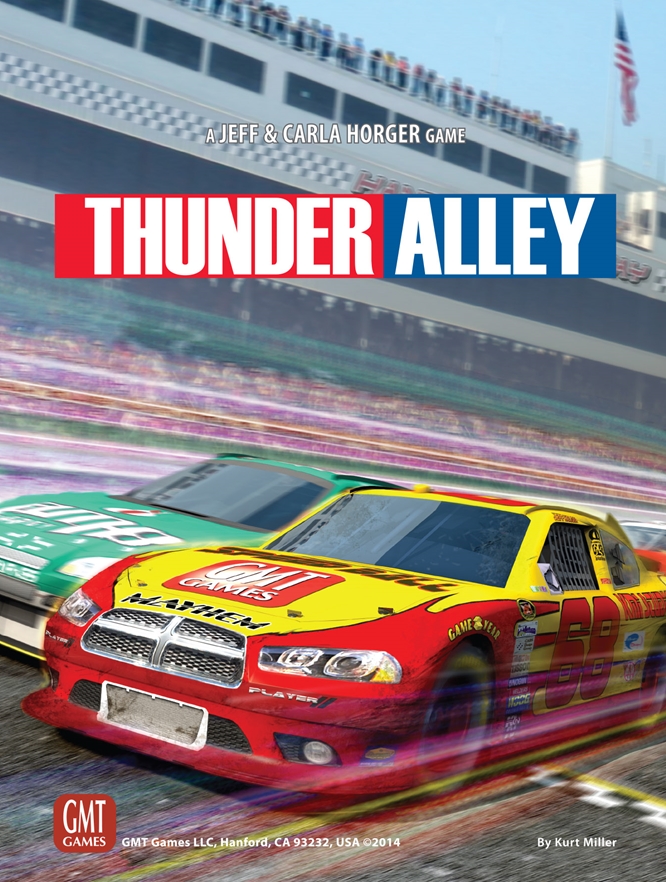 About the time that Brian arrived, we also hooked up with Bryan Fischer and John Sizemore of Nevermore Games.  We decided to play Thunder Alley, a stock car racing game (that doesn't carry the trademark of a well-known national stock car racing association).  I'm reminded a little of Formula Motor Racing, because each player has a team of cars, and because card play drives the action and often causes groups of cars to move together.  TA is considerably more complex and interesting, though, and I thought it was a lot of fun.

About the time we finished TA, The Party Game Cast had just finished recording Episode 40 of The Party Gamecast nearby.  This was a special episode, because in the Jack Vasel Memorial Fund Charity Auction, TPGC had auctioned off the opportunity to appear on the show in a full episode and play games with the cast, joined by special guest Stephen Buonocore of Stronghold Games.  So after the recording was over, I went over to the table and introduced myself to Rocki, Chris, and Maureen, familiar voices to regular listeners of TPGC, and had a nice long chat with the unmistakable and irrepressible Bruce.  It was great to talk with them, and Bruce was kind enough to say that I'd actually made him laugh once or twice in my Party Gamecast shout-outs on Dice Tower News.  They really are a fun bunch.

Brian and Keith and I continued our custom of continuing to play games until a ridiculous hour of the morning, and Saturday was no exception.  I taught them Pergamon, my favorite Eagle/Gryphon game, which Kathy and I have played several times and really like.  Keith and Brian were lukewarm about it, though, so it won't be first on my list of games to bring to after-work sessions.  We played Bang: The Dice Game, which we agreed would probably be more fun with more people but which doesn't shine with just three.  We played Keith's "Legend of the Five Rings" edition of Love Letter, complete with crazy Japanese accents.  And we wrapped up our old favorite Citadels.  We incorporated the Wizard and the Navigator this time, and although I was the only one to complete eight districts, I think Keith had the high score and won the game.

We didn't end up playing in any Sunday morning tournaments (although I'd considered trying my hand at the Yspahan heat), but instead just returned to visit the vendors one more time and then went in for some final open gaming.  We met up with two regular acquaintances who Keith and Brian regularly see in the Conquest of Paradise tournament, Brian and ... Brian and ... dang, sleep deprivation finally caught up.  (Dave - his name was Dave.)  Anyway, they taught us Mag-Blast, which turns out to be a science fiction variation on Naval War.  Unfortunately, Keith was eliminated early (I think that was my fault), and it took awhile to eliminate the other three players, but eventually I won - which was very unusual for me at WBC this year.

Brian and what's-his-name (Dave! Dave!) had to get on the road, but Brian G. and Keith and I stuck around for another game of Villainous Vikings.  After two plays, I think it's a pretty cool game, pretty quick actually, with some fun decisions.  I actually think it ends a little too early.  We also realized only after our second play that there are six points to be had for having the most money at the end of the game, which is a huge bonus (equivalent to winning Ragnarok or scoring most cards of different colors or most cards of the same color).

So all in all, WBC 2014 was a success, if not for the reasons I anticipated.  I really hoped to win the WS&IM tournament, but I didn't even win a single battle.  On the other hand, I just hoped to play Acquire but actually made it into the semifinal.  I learned a bunch of new games, I bought Concordia, and most of all I met up with a bunch of people that I love to see at these conventions.

Now to catch up on sleep...
Posted by Paul Owen