Last year I wrote about the shortcomings of Monopoly as a case study for game design.  I caveated my criticism of the game with the observation that it is still among the best-selling games of all time.  One reader commented that there might not have been a lot of competition for Monopoly when it first caught fire as an American staple.  Re-reading that post inspired me to have a look at what boardgame options were available back when Parker Brothers introduced Boardwalk and Park Place to the gaming public.

I searched boardgamegeek.com for all games with an initial publication date no later than 1936, the year after Charles Darrow's patent and sale to Parker Brothers and the year that Monopoly became the best-selling game in America at 20,000 copies per week.  The result was a list of upwards of 1000 board and card games that might have been known to Americans at that time.  There's no way to tell (that I know of) which were the most popular in 1936, but a look at the number of people who rated each game on boardgamegeek gives me some idea of which are the most enduring today.  Here are the top ten:

There would be many others, of course, but one thing I notice about this particular list is that nearly all of the games are purely or virtually abstract.  Only Monopoly and Pit constitute clearly thematic games, and both of them are financial.  I'd read elsewhere that part of the appeal of Monopoly was the fantasy of engaging in high-stakes real estate deals and striking it rich at a time when the country was suffering unemployment in excess of 20% in the midst of the Great Depression.  If Pit took a back seat in that category, it might only be because it had been around for thirty years, whereas Monopoly was something new (to most Americans). 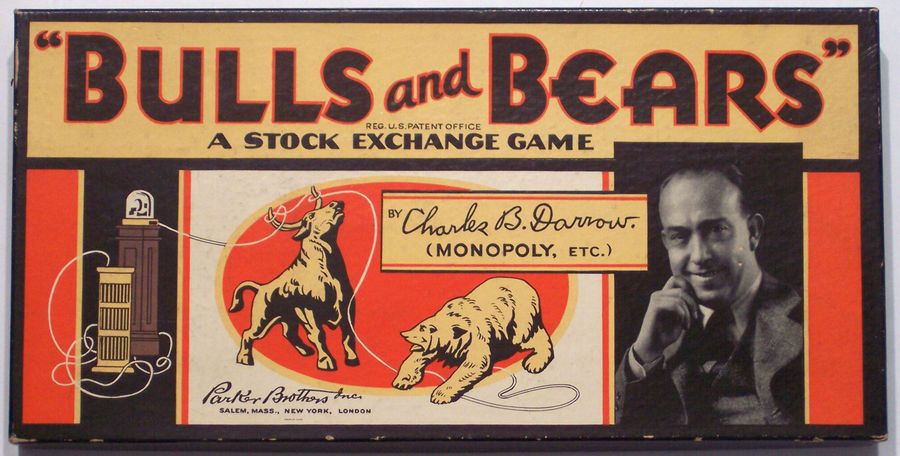 Parker Brothers published (according to boardgamegeek) a total of 22 new games in the years 1933 to 1936, plus a "Monopoly Stock Exchange Add-on," the earliest game expansion I know of.  One of those games, Bulls and Bears, is another financial-themed game designed by Charles Darrow.  As far as I can tell, it went nowhere.  I can only speculate (no pun intended) from pictures of the components that it struck the buying public as "another game trying to be Monopoly," and they might well have been right.

Darrow is believed to have based the Monopoly design that he sold to Parker Brothers in 1935 on unpublished games of property trading he'd seen played by neighbors and friends and on The Fascinating Game of Finance, which he'd been taught by Charles Todd and which apparently derived ultimately from Elizabeth Magie's Landlord's Game.  So whereas Monopoly may have been the indirect product of decades of playtesting and informal refinement, Bulls and Bears may have amounted to a hastily-assembled knock-off attempt to cash in on the success of Monopoly.  But as I say, I can only speculate.
Posted by Paul Owen