There's gold in them thar moons 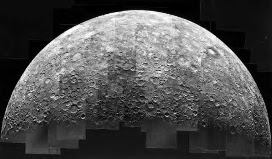 I'm working in earnest on an idea I've had for a while and mentioned here once or twice.  The game will be set at a time in the future when mining expeditions to other planets and moons in the solar system become cost effective.  Precious materials like gold, uranium, and tritium are scattered all over the solar system, and earth-bound industrialists will pay top dollar for them on the commodities market.  Players are CEOs of newly-capitalized mining companies seeking wealth - that is to say, "shareholder value" - by prospecting and mining rare raw materials as close as the moon and as far as Mercury or even Titan.
This game is going to be a step up from my previous designs in terms of complexity and, I hope, nuance of game play.  The real balance I want to strike is to make sure that there is no single run-away strategy.  I want players to be motivated to take risks, but I don't want the game to devolve into a matter of dice and card luck.

One thing I might be in danger of doing at this stage is trying to do to much.  I want to include a corporate strategy element, in which players decide how much to borrow to fund rocket missions and how much to pay in dividends to keep stockholders happy.  I also want to include a commodities market element, so that players deal with rising and falling prices of the raw materials they sell and the aerospace products and services they need.  I'm even entertaining the idea of have a futures market, so that players can sell inventory for future delivery.  I also want to have a space mission element, in which players are faced with the problems of getting equipment and crews to distant planets and moons and then retrieving the raw materials back to earth.

I think this is going to take some real time to work out, and a lot of playtesting to be sure I have the right balance.  I really want this one to work.  I really want it to be fun.
Posted by Paul Owen

Email ThisBlogThis!Share to TwitterShare to FacebookShare to Pinterest
Labels: Gold on Mars