This head-to-head card game pits two thinly-veiled fictional nations - the "United Provinces" and the "People's Socialist Union" - in a spy-counterspy conflict. Each player has a team of Agents numbered 001-016. Right away, this three-digit Agent numbering evokes the iconic Ian Fleming novels of 007, and it is this kind of thematic flavor that permeates Cold Warrior. Manila envelope graphic design and heavy use of the Courier typeface further evoke the 20th century era of typewriters and hardcopy files. Agent names are a mix of plays on actual historical figures (my favorite is Olivia North) and silly puns (like the muscleman Gargan Chuen). 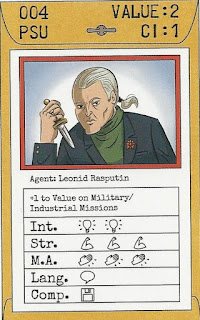 Each Agent has a Value for conducting espionage missions, a Counter Intelligence rating for defending against the opponent's missions, a specialized ability associated with certain types of missions, and ratings in strength, intelligence, martial arts, language, and computer skills. Oddly, these last five stats occupy over a third of the real estate on each Agent card but only weigh in on the outcome of a few specific events - assassination attempts, a few mission requirements, certain mission "adventures" (random modifiers to missions), and a very few others.

Particularly clever is the presence of a "Mole" in the opponent's intelligence agency. At the start of the game, each player randomly chooses and sets out of play one of his own Agents. The only purpose that card serves is to identify the "Mole" among the opponent's Agents as the one with the matching ID number. So for example, the People's Socialist Union player randomly selects his Agent 008 "I. Kant Singh" and sets him aside, out of play. The PSU player now secretly knows that United Provinces Agent with the same number, Agent 008 "Robert Bedlam," is actually a Mole working for the PSU. Likewise, the UP player will secretly identify which of the PSU Agents is secretly a Mole working for the UP. 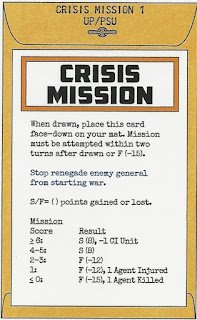 A Mission deck provides opportunities to progress toward winning the game. Each mission includes some flavor description, such as "recruit valuable military defector" or "break opponent's codes." Four types of missions - political, intelligence, military-industrial, and crisis - can be executed in one of four different geographic regions - Major Powers, Third World East, Third World West, and the opponent's home country. Crisis Missions uniquely require the player to complete them within two turns of drawing them or else lose significant points. Unfortunately the game provides no means of tracking how long a player has held a Crisis Mission and therefore whether they have exceeded the turn limit for completion.

Beyond Missions, players can also score bonus points by completing a secretly selected National Strategic Objective, which typically requires completing several missions of a specific type or in a specific geographic area. It should be noted that since the NSOs depend on the type of missions completed, their success depends in part on drawing the right kinds of missions from the draw deck.

Crucially, players must track not only which missions they successfully accomplish, but with which Agents. This requirement represents something of a record-keeping burden on the players. Missions completed with the Mole or with a Double Agent - and any National Strategic Objective those missions support - do not contribute to the player's score. Although the rules provide a helpful example of the information that players need to track with each completed mission, the game would benefit from a score pad with the required fields rather than depend on players to bring their own paper and keep the scoring straight themselves. 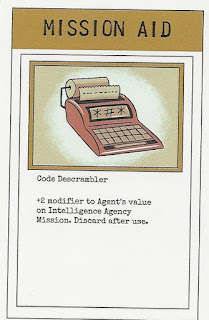 Much of the game hinges on card play from a Cold Warrior deck of various thematically rich cards that affect mission success and other game factors. Assassins can take Agents out of action. Mission Aids can contribute to a mission success. Decoys allow players to feint a mission in one location to dilute the opponent's response in another. Players can mark enemy Agents with Tails or Suspicion to reduce their effectiveness - and in the worst case turn one into a Double Agent. Counter Intelligence Units contribute to defense against an opponent's mission and can shake Tails or remove Suspicion.

The Tail and Suspicion cards - collectively called "mark cards" - represent some of the strongest thematic elements of the game. A player can reduce an enemy Agent's effectiveness by playing a "mark card" face down and sideways on an opponent's face-down card suspected of being an Agent. Face down "mark cards" reduce the target Agent's Value in completing a mission by one. The Tail can be turned face-up to reduce the target Agent's Value by two - suggesting that the "tail" is not trying to hide the fact that they are following the Agent in the open. Otherwise, "mark cards" remain face down until exposed by a sufficiently strong Counter Intelligence Unit or Agent. A Suspicion card - representing doubts being raised as to the loyalty of the Agent - can be either a False Suspicion (having no effect once exposed) or a Double Agent (rendering that Agent ineffective and negating any completed Mission scores in which that Agent participated).

All of this leads me to an important point: The game cries out for a player aid. Available actions, effects of cards, the Mission Resolution process, the mechanics of "mark cards" - all beg for some kind of one-sheet aid to remind players how the game works and to answer frequently asked questions. 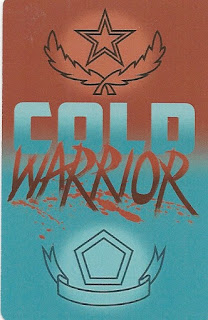 Missions, Agents, and Cold Warrior cards all have the same backs so that they can be held in hand and played face down in a mission without revealing information to the opponent. This common back confuses the initial set-up, however, since cards must be separated into their separate stacks, and the Mission and Cold Warrior decks do not have designated locations on any play mat; the players must keep track of which deck is which.

The overlap of rules and card effects, in which several different considerations can be in play at the same time, complicate the rules structure, with the result that many key rules end up surfacing late in the rulebook that answer questions and gaps in explanation early in the rules. In particular, "mark cards" are explained very late in the rulebook. The reader would benefit from an earlier explanation, when their effects and counters are discussed as part of the action descriptions. 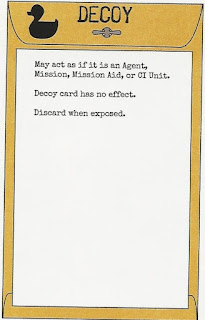 The rules have a few minor sources of confusion, such as when during Mission Resolution to turn cards face up and whether players can "Initiate a Mission" action with a Decoy instead of a Mission card.

Perhaps the most problematic aspect of the game is the game end and scoring. A player can attempt to declare victory with 60 points - with 40 points if they have at least twice as many as their opponent. By way of perspective, a high-scoring mission might garner 15 points, and an NSO might add 25. We found that missions can fail as easily as they can succeed, and failed missions can yield negative points. So there is a risk that a game could perpetuate indefinitely without any kind of countdown mechanism. Fortunately the rules allow for two variants to cap the play-time - a literal time-limit mutually agreed to by players, and a six-turn "short game."

In short, Cold Warrior strongly conveys its theme of espionage, secret agents, and international intrigue in every play of a card. Clearly the Cold War setting informed the rules and cards at every step of design. The game would have benefited from further development, however, to give players some means to mitigate card luck in the direction of strategy, as well as player aids, rulebook organization, and graphic design to more clearly depict game-relevant information.

The designer provided a review copy of Cold Warrior.

* The five Cold War games that I found in the top 1000 on boardgamegeek are
I'm happy to hear from readers who can identify other top-1000 Cold War board games.
Posted by Paul Owen