HistoriCon 2012: High Noon and the Battle of Manila Bay

High Noon
Friday morning at HistoriCon opened with a demonstration of High Noon (designer and self-publisher Leo Walsh), a home-grown 19th Century Western skirmish game.  Leo had a large, elaborate Western landscape set up in 25mm scale - right down to gullies that descended below table-top level and bald eagles that graced some of the rock formations.  The rules were pretty detailed, and I particularly liked the wounding mechanism (example to follow).

Our demo was a nice quick man-to-man skirmish.  I carried a 15-shot Winchester, my opponent a seven-shot revolver.  We each took cover behind sagebrush and started firing; because he had a pistol, he started closing the range for a better shot.  He hit me first with a minor wound; the card that I drew indicated that I tell my opponent that he had hit me in the lower torso but that I was still standing and holding my weapon.  What the card revealed to me alone (not to be shared with my opponent) was that my "activation" (initiative) and accuracy were degraded but that if I spent two turns to dress the wound, I'd be back to full health.  So I ducked behind a rock formation out of sight and started dressing the wound.  My opponent took the opportunity to reload his nearly-empty seven-shooter.  I stood up from behind the rock and started shooting.  He fired back and got an excellent shot (rolling "01" with percentile dice) that we interpreted to mean that he had hit me between the eyes and dropped me dead.

I especially like the limited-information method for handling gunshot wounds.  Action in High Noon is very fluid and has a nice realistic feel to it.  This was a fun game, and in relating it to my sons afterward, we were inspired to start a Western role-playing game campaign.  So my sons did a little research and found Aces and Eights, which will be our next big game project.

Battle of Manila Bay
My next miniature adventure came as the commander of the Spanish fleet in Manila Bay, Philippines, 1 May 1898.  As a Naval Academy graduate, I was rather familiar with Commodore Dewey's unmitigated success in the opening round of the Spanish-American War, initiated with his famous command, "You may fire when you are ready, Gridley."  Now in the role of Admiral Patricio Montojo, Armada Española, the tables were turned, and I had to find away to keep the Spanish fleet intact in the face of superior American firepower.

Unlike our historical counterparts, my fellow Spaniards and I were fully alerted to the approach of the US Navy and started in the harbor under the cover of Punta Sangley (Sangley Point) coastal artillery.  My immediate orders were to turn the Spanish ships north in two columns and make for Punta Sangley at top speed.  If we could round the point, we might escape west to the open sea and live to fight another day.  At first the American fleet approached from the northeast and turned west to cut off my escape route; I was very worried that they would trap us in the harbor.  But when the shore battery opened fire and damaged the flagship USS Olympia, the American commodore turned his fleet southeast to get out of range of the battery and fire on my ships from long range.  This maneuver suited me just fine; I was hopeful that he would keep his ships committed away from my escape route and that I would retreat before he could catch me. 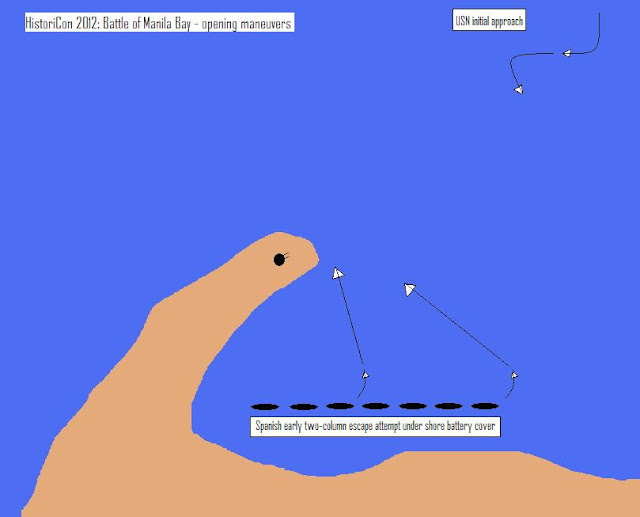 No such luck, however.  Once he realized that I had no intention to stand and fight, the American commodore turned to pursue.  The superior speed and range of Olympia and Baltimore were too much for my squadron to get away.  He severely damaged my flagship, Reina Cristina, when one of his shells penetrated my deck armor and crippled my propulsion plant, slowing the ship to two knots.  By this point, I had taken Cristina out of the column and used her as a screen for the remaining squadron.  But it was too little, too late.  Before long, Cristina was sunk, soon followed by my other large cruiser, Castilla.  Meanwhile the heavily damaged Olympia maneuvered out of the range of Punta Sangley artillery, denying the Spanish any hope of dealing a significant counterblow to the American squadron.  We conceded defeat; though three or four light cruisers might have escaped, the day belonged to the US Navy.

Game Master (GM) Brian DeWitt ran the game based on his own rules set, When Dreadnoughts Ruled the Seas.  Combat consisted of fairly straightforward roll of a 12-sided die for each firing gun; hit probability depended on gun type and range to target.  Hits resolved on a damage table, modified by gun type, and critical hits resolved if the gun type was sufficient to penetrate the armor.  We completed the entire scenario, including rules explanation, in about an hour and a half.

I had recently read The Last Gentleman of War, an English translation of the account by R.K. Lochner of the World War I German commerce-raiding light cruiser Emden's exploits in the Indian Ocean.  So the dreadnought era of naval warfare had caught my interest, and I later bought a copy of Brian's rules and some 1/3000 scale Russian ships with an eye toward gaming a few battles from the Russo-Japanese War.  Yes, I've added a whole new miniatures line to my collection now.

The button I wore read, "Money is the universe's way of telling you that you don't have enough miniatures."
Posted by Paul Owen

Email ThisBlogThis!Share to TwitterShare to FacebookShare to Pinterest
Labels: HistoriCon