Ethics in gaming: Reflections on the WBC seminar


[While on vacation in North Carolina, in anticipation of going to the World Boardgaming Championships in Pennsylvania in a few weeks, I scheduled a re-post of one of my most popular articles, a reflection on the "Ethics in Gaming" seminar from the 2011 WBC convention.  Originally appeared 15 August 2011] 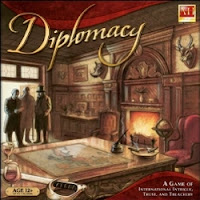 Last week at the World Boardgaming Championships, Joel Tamburo led a fascinating seminar on ethics in gaming.  I had no idea what to expect and was pleasantly surprised at the directions that the conversation took.  Right away, the group explored the question of whether it is ethically acceptable to lie in the course of a game.  The immediate example that came up is Diplomacy, a game only half-facetiously blamed for ruining good friendships.  A consensus emerged that there is an understanding that in a game like Diplomacy, lying is an expected part of negotiation.  Although success requires alliances, winning sooner or later requires betrayal.  So as long as it is understood among players that lying is - or can be - part of the game, then that becomes part of the game's acceptable code of ethics.

Ethical issues can emerge when games bleed over into real life, however.  If someone's feelings are genuinely hurt by a twist of the knife in a game, it raises the question of whether even perfectly legal game-play can cross a line if it damages personal relationships.  It happens that not all games are for all people; some people refuse to play Diplomacy because it is just too cutthroat for them.  That makes sense, too, because presumably the point of a game is to have fun; if playing under a code of behavior that permits back-stabbing ceases to be fun (for an individual), then the game (for that person) ceases to be worth playing.  I have had two episodes in which perfectly legitimate moves in games actually hurt people's feelings - people very close to me - and led me to adjust the way that I play to accommodate the relationships that I have with the other players.

Another interesting aspect of games that involve lying can bleed over into real life as well.  Sometimes we learn how to lie, or how to detect lying, by playing games in which good lying is rewarded.  Bluffing might be considered lying, so a person who develops skill at poker might also be honing social skills that can be used to take advantage of other people.  One member of the seminar raised the question whether it is morally proper to play a game that practices and develops the "skill of sinning," such as becoming more adept at lying. 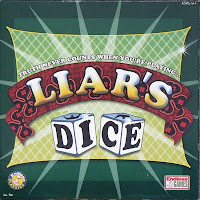 I shared an experience I had as a junior office aboard a submarine in the Navy.  It was the custom of the wardroom to get together occasionally at the Officers Club for a game of Liar's Dice.  At one particular session, I was alarmed to learn that I was remarkably good at lying to the captain.  I could just imagine being in a situation at sea in which it would be easier to lie to the captain in the middle of the night than to tell him what was really going on, and I didn't like thinking that I could actually pull it off.  (For the record, I never did, of course.  The Naval Academy Honor Concept is quite clear on this principle.)

I was surprised to learn about games that encourage stealing - Cosmic Encounter, in particular.  I don't mean games like Clue: the Great Museum Caper, in which one player is an art thief who moves around the museum attempting to steal paintings.  I mean that the game motivates a player under certain circumstances to swipe game pieces - like money from the bank - and keep it if he or she can get away with it.  As the others in the seminar described the roles in this game, it struck me as odd and a little outside my comfort zone in terms of what a game should be - or at least, the kind of game I like to play.  And a few others in the group, who were familiar with Cosmic Encounter, said they don't play it for that reason. 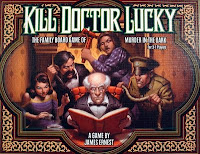 The discussion also turned to the question of inappropriate game themes.  I know of parents who discourage or prohibit their children from playing wargames as impersonal recreations of killing on a large scale.  There is some merit to this position as a matter of conscience.  But everyone present at this seminar was quite comfortable with wargames.  One theme that did come up as questionable, however, was that of the murder of an individual.  Joel posed the question regarding the game Kill Doctor Lucky, in which players compete to kill the fictional Dr. Lucky without being detected in the murder.  The tone of the game is humorous, but some might find offensive the notion of trying to get away with murder as the object of a game.  The group did not settle on a firm consensus on this point, though no one singled out Kill Doctor Lucky as an objectionable game in its own right.

I brought up Guillotine as another game with a potentially questionable theme.  Players represent executioners during the French Revolution competing to execute the most prestigious nobles.  The game even includes a few true historical figures - King Louis XVI, Marie Antoinette, and Robespierre.  But the rendering of the nobles and the action cards and the nature of the game rules are so comical that the game comes off as light-hearted, despite the rather morbid theme. 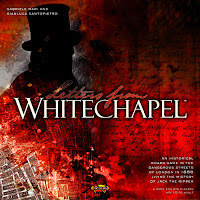 Subsequent to this discussion, I recently ran across a review of Letters from Whitechapel, in which one player attempts to carry out the role of Jack the Ripper while the other players try to apprehend him.  I find this game a little more disturbing than Kill Doctor Lucky and Guillotine for several reasons.  First, Jack the Ripper was a real serial killer, and his victims were real women.  The notion of playing this role by moving around the board attempting to kill prostitutes crosses a line, for me, because it represents a ruthless real-life murderer who was never caught.  Second, the game art sets a dark, somber tone, not at all a light-hearted deflection of the nature of the theme as in Kill Doctor Lucky or Guillotine.  Had I known about this game at the time of the seminar, it would have been an interesting addition to the conversation.

Surely there are few themes more objectionable to depict in a game than the Holocaust, and yet I'd read an article about a game called Train based on that very topic.  Actually, to be fair, Train wasn't so much a game as a work of art, or a psychological demonstration.  Still, it goes to show that there are some places in history that just aren't appropriate for re-visiting in the form of a game.

I think the overarching theme that developed from this seminar was that games have their own internal codes of ethics, but that as social exercises, they can also affect relationships.  On the one hand, if someone pulls off a brilliant betrayal in Diplomacy or manages to completely deceive all the villagers in Are You a Werewolf, then the rest of the players can only shake his hand and congratulate him on a game well played.  To some extent, though, trust relationships are formed or developed over games, and their social effects can bleed over into real life.  So we need to be mindful, when we play, that the people and the relationships linger after the box gets put away.
Posted by Paul Owen