Okay, it's that time of year when my favorite convention, PrezCon, happens in Charlottesville, Virginia, the week of President's Day.  I've got a preliminary schedule laid out, which is pretty much carved in sand - except, that is, for Pillars of the Earth, which stands like an immense cathedral, a great pillar, on the landscape of my convention plan.  (I'm running the PotE tournament, so I'm pretty committed to it.) 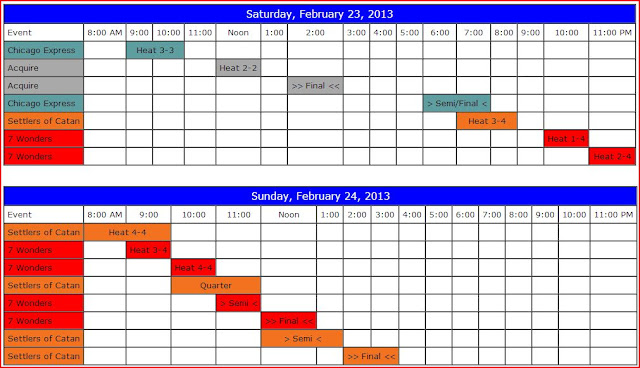 It's not quite as jam-packed as I usually have it.  Really, besides PotE, I just carved out a few key favorites - Chicago Express and Acquire, which I only ever seem to get to play at conventions, and Settlers of Catan and 7 Wonders, of which I never tire.  That leaves Thursday evening, Friday morning, and Saturday afternoon pretty open to doing whatever strikes me at the time.  My friend Grant Greffey, who got me hooked on conventions, pretty much approaches the entire con that way.  Although he might have his eye on one or two key games of interest, he flies by the seat of his pants from start to finish and has a great time doing it.

I always want to learn at least one new game at every convention I attend.  The demos I have my eye on are Russia Besieged and Borodino, the latter of which is a new Columbia game that looks interesting.  I don't do nearly as much wargaming as I used to do (Midway and Wooden Ships notwithstanding), so I'd like to see what's being done nowadays.
Posted by Paul Owen