Wits and Wagers at work 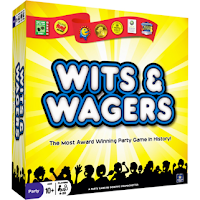 Today we had a pot luck luncheon at work, a sort of celebration of the end of the fiscal year - or at least, just an excuse to blow off some steam on a Friday.  My team lead asked for game ideas, and I volunteered to be the game host for the event.  With a group of twenty generally smart but not avid game-playing people, my immediate thought was to run Wits and Wagers (designer Dominic Crapuchettes, publisher North Star Games).

W&W is a terrific party game for a large group.  In our case, we had twenty people, who divided themselves into five teams of four.  (The rules suggest seven smaller teams, but our game worked out fine with five.) The great thing about the game is that you don't have to know trivia; you just need to recognize the right answer when you see it.  We had a pretty good age range in our group, so questions about the Rolling Stones and Buddy Holly actually got some nods of recognition.

The premise of the game is that there are seven rounds.  In each round, a trivia question is asked whose answer is a number (such as a year, a measurement, or an amount of money).  For example, one question asked, "In what year were women first admitted to the United States service academies?"  Each team writes down an answer.  The answers are arranged from least to greatest on a betting mat.  Teams bet poker chips on the answer they believe is closest without going over.  The payout depends on how much of an outlier the right answer is.  If the median answer among the guesses turned out to be correct, then it pays 2:1.  If the smallest of all five guesses is correct, then it pays 4:1.

I should mention that one of the guiding principles of North Star Games is that they try to design games so that everybody is playing all the time.  There are no turn-based mechanics in W&W, and there should be very little down-time for anyone in the course of a game.  Everybody is working on an answer at the same time, and everybody is deciding what to bet on and how much at the same time.  That principle seemed to play out well in our session, and I didn't have to use the egg timer to keep things moving.

Usually when I play this game, people bet aggressively, and I have a problem with running out of poker chips when people win big.  That wasn't the case in this game at all.  Teams bet very conservatively (or very poorly), so there was never a team that bet a giant stack of chips and won a payout of an even bigger stack of chips. In fact, three of the five teams lost everything they had on the last question.  ("In what year was the novel Frankenstein first published?")  The winning team won with 59 points in poker chips - a remarkably low winning score in my experience.

But of course the real pay-off was how much fun everybody had playing this game.  I got a lot of positive feedback from co-workers who had a great time and really enjoyed themselves.  And of course that's what it's all about.

I should add that my team lead was very gracious to announce, before the game started, that I had a new game of my own published, and then showed everybody her copy of Trains Planes and Automobiles.  Needless to say I was surprised and very appreciative of her support.  I got a few questions about TPA afterward as well, which was really nice.

Oh, and in case you were wondering:  Frankenstein, by Mary Shelley, was first published in 1818.  She wrote it while in Geneva one summer with her husband Percy Bysshe Shelly and Lord Byron, who had proposed that they each try a hand at writing a supernatural tale.  As for the service academies, the four major academies (West Point, Annapolis, Air Force, and Coast Guard) first admitted women in 1976.  As a member of the Naval Academy class of 1982, I was quite aware of this transition period.  What few people realize is that the U.S. Merchant Marine Academy admitted women in 1974, two years before the other academies.
Posted by Paul Owen