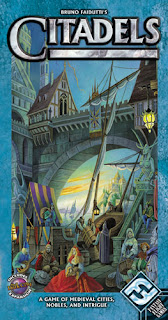 A couple of weeks ago, our good friends Sheila and Keith invited us and our friend Jeff over for dinner and games.  The five of us played Citadels (designer Bruno Faidutti, publisher Fantasy Flight Games), which turned out to be terrific fun.  As it happened, Sheila had an extra copy, so we went home with Citadels as a kind of door prize.  Later we learned that she and Keith had been playing two-player and really enjoying it, so we tried it ourselves this evening.

Citadels has become my favorite game of all - even over 7 Wonders.  The brilliance of the game is in the role selection and sequential role resolution.  When the five of us played, we all seemed to value the Architect most of all for the two free cards he'd offer - until someone would always select the Assassin and kill the Architect.  That seemed to be de riguer in our session that night.  So then people would shy away from the Architect unless they had some reason to believe that they wouldn't be assassinated.  There was a lot of second-guessing, and at one point I had a particularly lucky turn when I selected the thief with the expectation that Sheila (who had six gold pieces) would select the Magician for his card-exchange ability (because she kept complaining about her cards).  My bet paid off, and Sheila was set back more than a turn in building construction when I took her stack of money away.  (If looks could kill .... :-) )

﻿
﻿ In our case, I think I was too willing to build small buildings with the intent to jump to an early lead and get control of triggering the end of the game.  My building efforts stalled out, however, and Kathy ended up building her seventh and eighth buildings in one turn.  That undermined my selection of the Warlord, who had planned to burn down her Church (but could not do so once she had eight buildings).  She ended up beating me both in building points and in building the eighth building first.  Final score - Kathy 36, Paul 31.

I really, really like this game.  I am surprised it has not caught on at PrezCon nor at the World Boardgaming Championships.  Maybe I should do something about that.
Posted by Paul Owen

Email ThisBlogThis!Share to TwitterShare to FacebookShare to Pinterest
Labels: Citadels